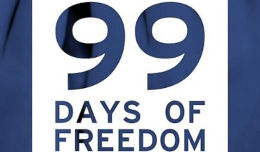 Somehow, somewhere, we all do it.

On the couch, on the table, in the kitchen, on the bed. Young or old, boy or girl, everyone does it. There’s nothing to be embarrassed about. We all check Facebook.

Facebook and other SNS (Social Networking Services) have become such a part of our lives, it’s hard to imagine a day without it. Indeed, Alexa Internet which is a subsidiary company of Amazon and provides commercial web traffic data, ranked Facebook as second (the first being Google) in its annual web traffic rank (followed by YouTube and Yahoo). It seems that most people with access to internet and Facebook have accepted this as a way of life.

Yes I just DID ask that. And you should ask yourself it as well. A Dutch agency named “Just” is conducting new study campaign called “99 Days of Freedom” which aims to answer this question.

They claim that for 99 days of not using Facebook at all, the average user will gain at least 28 hours which he/she can then use to engage themselves in something a bit more productive – because you must admit, there’s more to life than sitting around writing on people’s walls and poking them (pun intended).

Most people cannot go a day without logging into Facebook to check what they’ve been missing out on. So how about 99 days? The experiment actually began as a simple joke in the “Just” office but quickly spanned into a widespread topic and ended up being taken very VERY seriously.

The “99 Days of Freedom” challenge is just that. You stay off Facebook for a period of 99 days and judge whether or not it makes you happier.

The duration was much argued upon where if it was too extended, participants would lose interest but if it was too short, it would not have enough of an impact to analyze the behavioral changes in the participants. So after much debating, a time duration of 99 days was agreed upon.

Once you’ve signed up (a simple process) simply log out of Facebook and proceed about your day to day activity. You can check back on your progress by navigating to www.99daysoffreedom.com/yourusername to see exactly how many days you have left. Additionally, for those terminally addicted to Facebook, the team of Just and 99daysoffreedom state that after 33, 66 and 99 days, they will email the user to ask his/her feedback regarding the experiment. They also promise to offer bulletin boards and a forum for users to be able to communicate with other users to share experiences and give/receive advice.

That is a very interesting question. I for one signed up for the experiment the moment I heard about it, just because I wanted to prove to myself that I could stay off Facebook. However, I must admit that I, being of both sound body and soul could not stay off Facebook for more than 24 hours. This is not due to the fact that I am a raging socialholic (in fact I can very well stay off the grid) but rather, because job requirements required me to stay in constant contact with people via Facebook and WhatsApp.

That being said, I assumed that the counter system for the experiment would be reset upon my logging back into Facebook, but weirdly enough, the counter is still running. This makes me feel like the experiment is giving users faux hopes or scaring them into a state where they feel that they question their self-control if they go against the experiment

After using it, I’m of two minds. I feel that the experiment is slightly broken. You log out of Facebook telling yourself that you are going to engage yourself in something more worthwhile but you just end up counting the days till you can log back in. Also, if you think that being on Facebook is not making you happy, all you have to do is leave by either logging out of your account and not logging in ever again, or simply deactivating it. There’s no need to join an experiment just to prove to yourself that you’re happier without logging into Facebook every day.

The key word here is self-control. You don’t need an experiment to judge whether or not you’re a socialholic. YOU decide. YOU have the power *Play inspirational music here.*