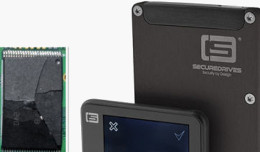 “Self-destruct sequence initiated”. You’ve probably heard this line being said a million times, usually at the bad guy’s hideout. It’s their last ditch attempt to blow the place (along with the hero) and cover up all their dirty secrets.

“This SSD will now self-destruct.”

Now that is something you will NOT see every day. SecureDrive; a company known for making SSDs has recently debuted its own set of drives that will physically destroy itself and all data stored within it at the press of a button. Titled the “Autothysis128S” and “Autothysis128T”, these SSDs ship with the usual 128GB of storage space and perform like any other regular SSD and SATA II drive – except for the part where they blow themselves up.

Aimed at companies who store valuable corporate information and trade secrets on these drives, they operate via a predefined text message which a user sends to a cellular number unique to each SSD and upon confirmation, the mechanism will execute and the flash chips inside the drive are physically destroyed making data recovery downright impossible. The drive will also self-destruct if anyone attempts to forcefully open up the drive.

Other security measures include; removing the drive from a PC or SATA II connector, maximum number of failed PIN attempts, and a low battery level along with a tap to destroy function.

Another company, RunCore, also demonstrated its lineup of self-destructing SSDs; the InVincible SATA SSD last Wednesday. As well as simply frying the NAND flash chips, the device also has secondary method of data deletion – which is to overwrite the entire device with gibberish data and code. Again, this action cannot be reversed and should only be used as a last ditch attempt.

Specs wise, both devices conform to more than 100 country-specific data protection laws and provide read/write speeds of up to 240Mbps and 140Mbps respectively and have a rather high tolerance to heat (-45 to 95 degrees Celsius).

Needless to say, these drives are not exactly your run of the mill average SSD. The Secure Drives base SSD will set you back around $1,500 for the “S” model and an additional $180 for each touchscreen token to link the drive, not to mention the $47 per year subscription for the GSM subscription.

But all in all, if data protection is one of your biggest concerns and you have absolutely critical vital information that needs top level security, you may want to consider at least one of these drives for your business.

Better safe than sorry, eh? Besides, you get to play Mission Impossible with your data. What’s not to like?