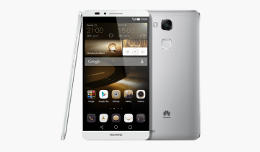 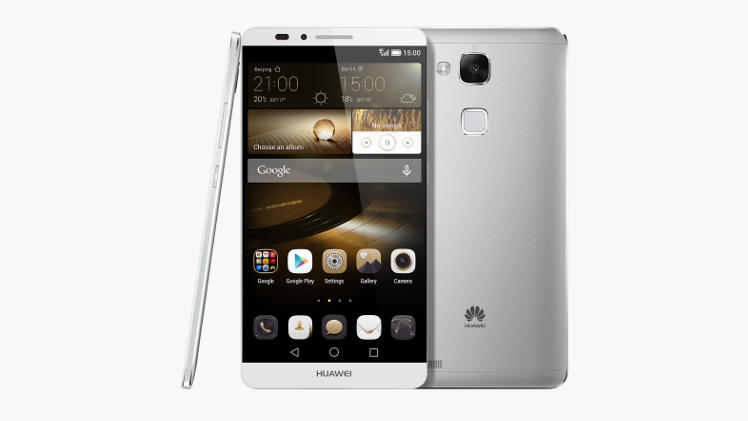 Straight off the bat, the first thing you notice about the Mate7 is the design. It’s very simple, all clean metal and smooth corners. The massive 6” screen takes up almost 80% of the body; there’s two metal bezels on the top and bottom, which contain light sensors, speakers and the Huawei logo. No waste of space here. Underneath this is some home-grown Huawei tech: an octa-core “Kirin” processor, 2GB of RAM for the 16GB version/3GB of RAM for the 32GB version and Android 4.4. skinned to the teeth with EmotionUI. It looks quite high-end and mature.

That’s a lot of juice. We’ll test how it does further on: let’s return to the look and feel. At the back, it’s one single metal surface with the camera, LED flash and a fingerprint sensor underneath that (yes, it has a fingerprint sensor: we’ll get to that later). The left side of the phone has two trays for two SIMs, but with a slight twist: the upper SIM slot will accept microSIMs, whilst the secondary slot acts as a nano SIM slot or a microSD card slot. Cool, huh? (You can only use one of the two: there’s a little tray that makes this possible). 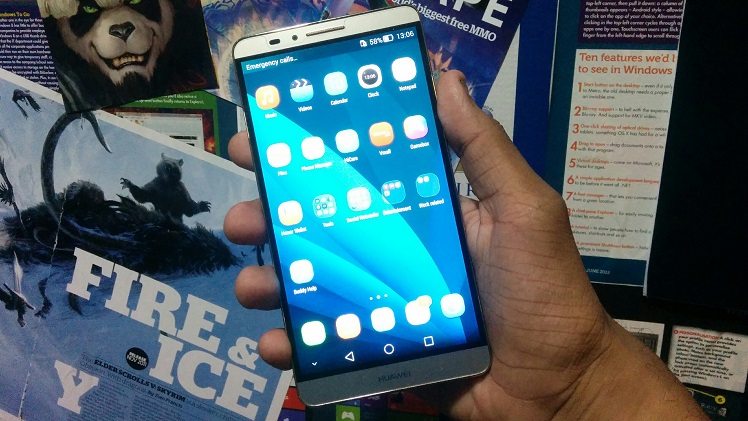 We mentioned to octa-core processor. Kirin is a quad-core 1.8 GHz Cortex-A15 paired with quad-core 1.3 GHz Cortex-A7. We’ve seen this kind of thing before – it’s ARM’s big.LITTLE at play here. The A15 will do the heavy stuff, like gaming, and the A7 will handle everything else.

In practice, the Ascend is a pleasing package.

The display, as mentioned above is a 6” IPS LCD (1080*1920px) touch screen. At full brightness, the display is actually insanely bright – I found the perfect brightness at around 40% (setting it to auto brightness works too). Images are crisp and highly detailed. The camera, 13 Megapixel snapper in the rear, comes with HDR. It is also capable of recording video at 1080P, 30 FPS; the front facing 5megapixel camera shoots 720p video. While we weren’t blown away by the photo quality – images looked a bit unsaturated – the camera was responsive and the vivid IPS made things look quite good on-screen.

It also feels very premium in the hand, something that makes a huge difference; after a day of using this, switching back to a Galaxy S5 seems … just…cheap. The thin-phone aesthetic really works.

Now, the phone ships with Android 4.4.2 KitKat. The Lollipop update is due sometime in March for the Chinese market, and the rest of the markets are set to receive it sometime in June. The phone shows Emotion UI 3, which is similar to how iOS and MIUI operate: no application drawer per say, but rather, all installed apps are sorted into folders on the homescreen. This was a bit annoying for me, as I’m somewhat organized with my desktop; I don’t want to spend time searching for apps on the homescreen. However, others on the team like the simplicity this brought to the table.

A small point I found annoying and a tad weird: the EmotionUI launcher cannot be changed by 3rd party launchers. I tried Nova Launcher, Aviate, Google Now Launcher and even Go Launcher, but the OS simply will not allow the launcher to be changed. With Nova, you could launch the application, but when clicking the home button, it would revert back to the EmotionUI launcher. When I questioned Huawei about this, they were gently adamant that they didn’t want the “Huawei experience” to be changed. A bit of a buzzkill if you’re an Android power user, really. 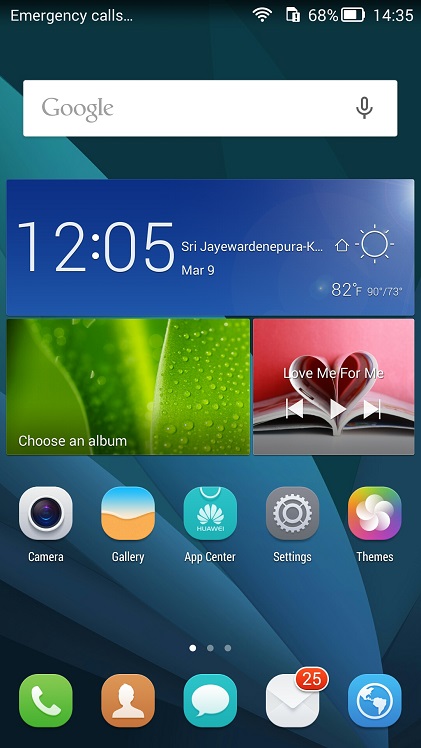 Our review device hailed from a Chinese market, there are no Google apps (Gmail, YouTube, Messenger, Hangouts etc.) installed: even Google Play had to be downloaded from Huawei’s own ‘App Center’. I was later informed by the folks over at the Huawei HQ that only the Chinese edition of the Mate7 had these irregularities, due largely to the Chinese government’s ban on Google services: the International version of the Mate7 had Google Play and non-Chinese apps.

Speaking of apps though, the Mate7 has a ton of them preinstalled. If you’re up to it, there are bloatware removers that you can use to uninstall these apps. Though it should be noted that this requires root access to the phone and you void your warranty by doing so.

Mind you, there are themes. Emotion UI does themes well, and as far as stock launchers go, it’s far better looking than, say, Touchwiz. There are a few handy tweaks such as the ability to hide the navigation bar and even customize the order of buttons at the bottom. The inbuilt task manager informs you of apps that are consuming too much battery and memory and allows you to kill unwanted apps. It even includes a harassment filter to block out unwanted call and texts. It’s quite a walled-garden experience, but Huawei’s thought out this particular walled-garden well.

We tested the Mate7 running Antutu 5 and Geek Bench. Time to see what Kirin has got.

In Antutu (V5.6.1), the Mate7 performed quite well, scoring 44613 points, beating flagships such as the LG G3, Samsung Galaxy S5, HTC One M8 and even trading blows with the OnePlus One. 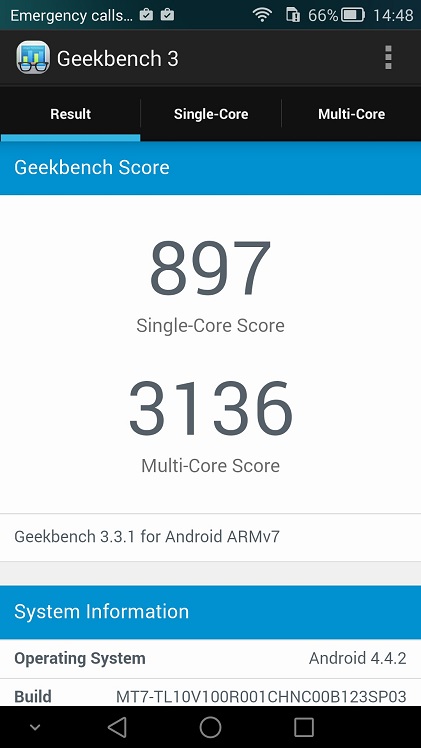 In Geek Bench, the Mate7 had a score of 897 points in single core and scored 3136 points in multi core. For comparison, my Nexus 5 scored 836 points in single core and 2389 points in multi core. A point to mention here: multi-tasking was a breeze, with the phone switching between apps quickly and with fuss. The Recents button shows all running apps in a 4*4 grid, allowing you to switch between apps at the literal press of a button.

Now the battery. 4100 mAh is a lot of power, and it seems like the perfect answer to Yudhanjaya’s incessant critiques about phones never lasting long enough. I set the display to maximum brightness. After the resulting solar flare had died down, I ran a few games such as Asphalt 8, Sonic and even a bit of Fruit Ninja, watched a whole lot of Youtube, all while connected to WiFi.

There was no SIM card installed, so I can’t vouch for mobile data consumption, but moderate use (on WiFi) lasted me a good 48 hours. That is epic. Factor in losses for 3G data consumption and you’re still looking at a phone that says “come at me, bro” to everything.

Fingerprint scanners did not get much love when they came out on LG and Apple phones. In fact, it seemed like a fad.

In the Mate7, the fingerprint scanner is just below the camera. You can use it to unlock your phone, authenticate PayPal payments and even use it to take photos. We found the sensor to be quite accurate and actually saved a lot more time when compared to using the unlock button. It will even wake your phone from standby if you hold your finger over the sensor. Pretty useful, really.

The 128 GB of memory is epic.Couple that with MicroSD cards, and you’re effectively carrying around a sizeable collection of Top Gear episodes in your pocket.

We also have to throw in a note about the speaker. Music playback quality quite clear and loud – for a phone. It’s not quite up to HTC’s BoomSound, but usable enough. Although for the best experience, it’s recommended that you plug in a headset.

The Huawei Ascend Mate7 is an interesting smartphone with quite a lot going for it. Offering octa-core performance that actually trades blows with some of the flagships of today, it’s well-built, well-designed and, thanks to the massive battery, very useful. Odd quirks are the bloatware and inability to use third party launchers.