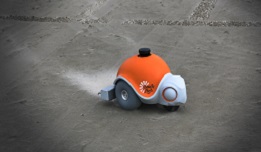 What has four wheels, drives by itself and is also green? The car of the future of course (sans the green). At the recently concluded Consumer Electronics Show (CES) held in Las Vegas, German manufacturer Daimler, showed off their electric powered Mercedes-Benz F 015, which navigated through the streets of Las Vegas without a driver, thus showing off the fact that all four occupants in the vehicle can have a face-to-face conversation. The F 015 can be operated autonomously or manually. When required for manual operation, the driver’s chair swivels to face forward and when in fully driverless mode, the four motorized lounge chairs can be rotated to allow face-to-face conversations leaving the driving to the on-board computer. I like to call him “Charles”.

One distinguishing feature is the pair of LED fields located at the front and rear that change color based on the car’s current driving mode (white in manual, blue in autonomous).

Feeling a bit down? Why not zap your brain to fix it?

The Consumer Electronics Show (CES) whilst being one of the biggest consumer electronics expo’s in the world, also showcases its own collection of weird and eyebrow raising tech. One such piece of tech was put forward by Thync. This involves the user sitting with a small module attached to his/.her forehead for around 15 minutes, during which electric currents are passed through nerves to their brain.

Touted as being the first lifestyle wearable to use neurosignaling algorithms, Thync uses waveforms that signal to neural pathways in order to change the mood of people and to improve energy, calm, or focus.

The Thync headpiece delivers a small electrical pulses to the brain via pads placed in specific places such as the temple, back of neck, or ear. A smartphone app then controls the electropulse settings which at current allow users to stimulate two mental states (increased calm or improved energy). Kind of like Electroconvulsive therapy.They expect to market the product by this year.

Drawing Robots: Making their own mark

Enter the Beachbot: A turtle-shaped robot that has a retractable rake and a plethora of onboard sensors. What does it do? Well, it uses all this tech to draw elaborate lines and designs on sandy surfaces. Yes that’s right. This guy is blurring the line between what man and machine can do.

It’s still a prototype, so expect a few bugs but the creators of the Beachbot (at Disney Research labs) say that it will soon be able to execute enormous designs that stretch across an entire beach.

Presently, Beachbot is limited to create designs within a 10×10 meter square area, which additionally needs to be marked by four poles with reflective material on them. The onboard laser scanner on Beachbot then detects the poles and uses them to determine the borders of its drawing area.

Due to the retractable Rake, Beachbot can draw multiple lines, not just one continuous line which can also be extended line by line to create lines of varying thickness (from 5cm to 40cm) in width. In addition to Beachbot itself, the team had to come up with software that could take an image and transform it into a motion path that Beachbot could execute. Beachbot’s cute turtle design also serves a functional purpose: It’s completely sealed to stop any sand from getting into its inner workings.

Imagine one of these drawing Da Vinci’s famed Mona Lisa or any fresco drawm by Michaelangelo (the artist, not the ninja turtle).