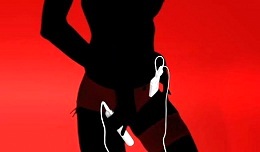 With Valentine’s Day coming up (yes, we like to think ahead) and you continue to be a long distance relationship until college gets over, or the two of you lose out on time due to work, innumerable meetings and of course, those dreaded business calls. With exactly a month to go, we set out some options, you would be able to ship to your respective locations just in time for a little 14 February adventure.

For the busy folk

This neat piece of clothing works within Bluetooth range and gentlemen, if your ladies are either too busy in the kitchen preparing food for the family or caught up with multiple work assignments that she just does not have enough time to pay you ample attention, OhMiBod (an American connected sex toy company, we know what you are thinking) introduces the blueMotion Massager. Turns out, this is the perfect underwear even for women without a significant other!

The mechanism sounds simple: blue panties that contain vibrators embedded with a Bluetooth chip. Voila. Works on iOS and Android. The cool features include: an accelerometer and volume controls. At $129 (That’s roughly 17 grand in LKR) it sure is a piece of attention grabbing clothing. Also, the best part? It’s made of lace.

For those who live away

At ReadMe, we believe that technology should reach out to everybody, including those in long distance relationships. Currently available on iOS and Android, Fundawear (Fun + Underwear, for those who are on Urban Dictionary) is a product of Durex who calls their product the “future of foreplay”.

Bad news however, Fundawear is not yet officially available in the market and is at a “durexperiment” stage and in case you are curious to try it out and your SO lives in Aussie, go to their Facebook page and sign up! If you are not convinced, do have a look at this video.

We listed a few reasons as to why Fundawear is way cooler than the blueMotion Massager:

–          It’s all the pieces of underwear for both and looks sexier than just blue panties;

–          Finally, it’s a mobile app. This means it makes long distance steamier between states, provinces, districts or even cities / towns and non-Bluetooth-able distances, once (hopefully) this is launched.