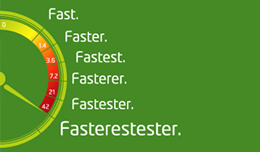 If you’ve been paying attention to the scenery in Colombo, you’ll have seen Etisalat adverts ALL over the place, promising this:

A quick glance at http://etisalat.lk/Dual_Carrier_Service.cfm confirms: they say they’re six times faster than the competition.

Six times faster than everybody else? Now that kind of speed is too good to miss, so we tested the claim ourselves in an effort to separate fact from marketing and see how fast “6 times faster” really is.

Firstly, some background on the matter. Etisalat, the communications giant, has been providing high-speed HSPA+ services for some time now. They recently upgraded their tech to DC HSPA+ – Dual Carrier HSPA+. This is a technology that works by creating and allowing access to two simultaneous HSPA+ data streams: it’s fully backward compatible with the normal service.

You can double whatever the speed you receive from HSPA+ with DC-HSPA+. You will experience really fast download speeds.

As any internet user knows, the only way to actually measure speed is to download something. We conducted a survey of mobile broadband speeds on TRCSL premises, using identical hardware and software – nothing flashy, but mid-range consumer laptops like the average user would have.  The towers – not just Etisalat, but others – are just 500 meters away from the test site,  right opposite to the Elvitigala flats: perfect, consistent reception, and as good as you’ll ever get in Sri Lanka.

Here are the top three contenders (as of the time of writing):

Speed test (note: results are in Megabits per second)

Here the facts come into play. As you can see, Etisalat fluctuates all over the board. Airtel’s HSPA+ service solidly beats the Etisalat 7.2 Mbps, performing close to 1 Mbps better in all tests. Now look at the Etisalat DC HSPA+ service.  There’s two HSPA+ lanes operating there, so one would expect it to be exactly twice as fast as the normal service: in fact, it’s not even close. It even consistently loses to the single-lane Airtel HSPA+ when downloading from the furthest server (USA).

So no, Etisalat DC-HSPA+ is NOT “six times faster” as their advertisements claim. They aren’t really even twice as fast: looking at the data, the single-lane Airtel HSPA+ performs, on average, just as well as the new dual-lane system.

So is Etisalat’s marketing department lying to the consumers with their promise of dual lanes? No, as it turns out, they’re not. We also conducted a bandwidth test to confirm:

Bandwidth test (note: results are in Megabits per second)

The bandwidth is there: two lanes, twice as fast as the existing Etisalat service. The problem is the marketing: it’s still not six times as fast as the competition. Users will know that there’s a vast difference between bandwidth and download speed – it’s like water in a pipe: if the water is your data, then bandwidth is the width of the pipe. Speed is how fast the water (data) goes through that pipe. Simply upping the bandwidth does not give more speed. In Etisalat’s case, when you actually download something, you’re not seeing speeds that are six times faster than the competition (not even close): neither is it actually twice as fast as their own existing, stable HSPA+ service.

So what’s Etisalat’s justification for the advertisements?
Theory.

HSPA+’s theoretically computed maximum is 21 Mbps (Megabits per second; remember the bits and divide by 8). Dual-carrier HSPA+ works by basically creating two lanes, doubling this theoretical value. Theoretically, you can download at 42 Mbps. Theoretically. The Etisalat website clearly says the word “theoretically”, but the public advertisements don’t. They probably have word limits on those billboards – after all, why put another word when you can get away with less, right?

Factually, as the tests indicate, you can’t even get close.  The maximum download speed we actually got was 9.91 Mbps off the German test server. The 42 Mbps that Etisalat claims to deliver is purely theoretical. In practice, you’re missing 32.09 Mbps.

And of course, this doesn’t matter when it comes to pricing.  As Daily FT says:

[quote] “The Dual-Carrier HSPA+ will give users a download speed of 42 Mbps and an upload speed of 5.76 Mbps. The dongle and Wi-Fi routers are now being brought to market by Etisalat where a DC-HSPA+ dongle will cost approximately Rs. 16,000 and routers from Rs. 25,000.”[/quote]

Whoops. You have to pay Rs. 16,000 for “six times faster”. Contrast that with the closest competition, Airtel HSPA+, where a dongle is somewhere in the vicinity of Rs. 3000. That’s 5 times more money for speeds that beat the single-lane service by only a few KBps. This isn’t a comparison of Etisalat vs Airtel: it’s a look at Etisalat’s own claim to be six times faster than its competition.

Regretfully, we have to say: they’re good, but not as good as their advertising!