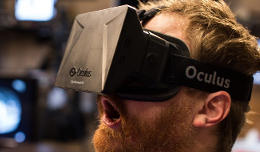 First we had the Oculus Rift, then Project Morpheus. Now Samsung’s dipping their hands into Virtual Reality. VR has become one of the hottest emerging technologies in the world.

Unless you have been busy fighting a Zombie Apocalypse, you should have heard about Virtual Reality by now. For those who have heard of VR, you can safely skip this part. But for those who’ve been fighting the zombies…read on.

Most VR systems work with a pair of goggles that completely shuts out your vision of the real world and is paired to a processing platform such as a gaming console or a computer. The virtual worlds created by the computer or console can then be shown to the user through screens embedded in the goggles.

The goggles usually come with sensors to detect the user’s head movements, track its position relative to the virtual world and displaying the world from the corresponding perspective. The advantage over a traditional screen is that the user gets a 360 degree view of the virtual world – and like in real life, he or she can look around to see what is around him.

There have been many incarnations of VR over the years, with users being able to use their hands to manipulate objects in the virtual world. NASA astronauts have been using VR simulations for training for the past few years.

However VR has mostly been out of reach for the general consumer until Oculus Rift launched its wildly successful Kickstarter campaign.

VR for the Masses

First, there’s the Oculus Rift, which aims to put VR into the hands of the masses. The Rift has a focus on gaming, and many gaming industry veterans – such as Gabe Newell, John Carmack and Cliff Bleszinski – have endorsed the Rift as a breakthrough technology in gaming. Some, including Carmack, have quit their jobs to help bring Oculus to the market.

The PR success and the potential of the Rift prompted other big name players to enter the consumer VR market. Earlier this year Sony showcased its Project Morpheus – another gaming oriented VR headset, rumored to work exclusively with PS4 games. Samsung also revealed the existence of the Gear VR headset which they plan to reveal later this year. All of these seem to be targeting different audiences. The Gear VR, for example, pairs with a smartphone.

To top it all off, Google also revealed cardboard VR app at IO 2014: an extremely cheap DIY cardboard solution that can be assembled into a functional set of VR goggles, thereby showing exactly how cheap this technology can become in the future.

What can we expect?

Entertainment. Put aside thoughts of magical museum tours and educational activities: most of the money in VR is in entertainment – mostly, the current focal point seems to be the lucrative gaming industry. VR might very well be an evolution of the age-old ways in which we play games – imagine playing a racing game and looking to your sides to see which opponent is driving beside you, imagine turning your head instead of using the mouse or the analog sticks to turn in Call of Duty. The immersion is going to be off the charts.

Mind you, there are problems that have to be addressed first – including the act of creating said content – but at the rate the technology is going, it won’t be long.

Apart from gaming, Oculus Rift has already been tried out by the Norwegian Army to be used by Tank crews. Four camera feeds covering a 360 degree view around tank are used, allowing tank crews to look around and safely navigate without ever having to open the tank hatch for navigation. The possibility of overlaying a HUD with vital battlefield information is also a possible feature. I guess we’re not the only ones who imagined sci-fi tanks as kids.

There’s also training programs. Old hat, really: NASA and pilot training have been using this for sometime. There are many modern examples, quite a few of them military. We see a future in which potential Formula 1 drivers can practice on simulations so accurate they won’t be able to tell the difference.

There’s others. If you’re curious, I recommend www.vrs.org.uk/virtual-reality-applications/index.html to see brief explorations of how VR can affect major industries. However, back to the fun part – gaming. Gear up, men: the future is bright and virtual!