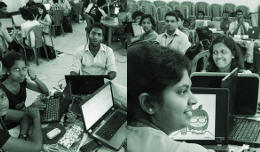 “I trained as an accountant, and when I decided to start my own business – I was 24 – my parents were absolutely devastated. I didn’t want a nine-to-five job. But doing this is a two-way street: there’s no easy hook to pacify everyone. There will always be too many brick walls headed in your direction, so you have to believe in your dream – and believe in yourself.”

That’s Manju Fernando of the Lankan Angel Network, speaking at the third day of the Yarl Geek Challenge in Jaffna. Manju, a former founder of Millenium IT and now the CEO of Axienta, is addressing a question plaguing many start-ups: how do you convince your parents to let you do this when they traditionally expect to be a doctor, lawyer or engineer?

Perhaps nowhere is this question more valid than in Jaffna. Take a step back: this a region emerging from a post-war status and piecing together a techscape of its own. Here, parental wishes play a major role in a person’s life – especially when it comes to education or a career. And unlike many in Colombo, few here have the safety nets that free people to forge ahead with their own startups. Indeed, we can see the seeds of doubt etched on the faces of those who are listening – a scattering of university-level teams that have pitched, hacked and talked their way into this last stage.

Nevertheless, they’ve been listening to the judges from the Lankan Angel Network for the past three days, and some of the advice seems to have rubbed in. Today, on the last day of the Yarl Geek Challenge, things have visibly improved. The pitches are better. The products have improved. People actually have business plans.

The first to take the stage was Team Puissance, who debuted their digital electricity meter, again with the story-fied pitch. They’re got three components – the meter, the web portal that can be accessed by the user (it looks like a very nifty interface right now) and another web interface for the back end. However, the judges seemed to find their financial evaluation seems a bit hazy and we found their presentation far too dramatic.

Next came team Cyborgs, who frankly botched their presentation, pitching an automated robot for heavy lifting. An interesting idea, but without a physical product, it failed to impress the panel. “No, don’t show me the code,” exclaimed a judge. “Can you give a destination and show me how it works?

Team Strikers became the first to earn the audience’s applause. Their first-day pitch – a a modularized system that controls your home electronics – lights, fans, everything – via voice – seemed a bit unrealistic. Nevertheless, in the space of just two days, they’re built a prototype, voice recognition tech that seems to work with our accents, and wired a polite. Knightrider-esque voice into it to say “Yes, sir”. Of course, lots of technical things to be ironed out, but you know things are cool when a robotic butler voice turns off a hastily wired-together light bulb on stage and bids you good night.

A slightly more mature team bustled up on stage next, presenting Brizo, an android app and web-based platform that primarily provides traffic avoid. urRelations came next, a site that which seems to revolve around queuing gifts and such to be sent to loved once. The judges go hard on this on the market size, especially with regard to revenue expectations. While Brizo had what looked like a very seasoned team behind it, urRelations had no such luck.

Another team came up with a localized aspect of the bidding side of Ebay. In two days they’d managed to get a fully functional system running, including the site and mobile notifications for auctioneers and bidders. However, as the judges pointed out, they’d still need to outspend ikman.lk to make this work on this scale.

A team from the university of Peradeniya intended to have a smart energy meter. Unfortunately, they hadn’t built a prototype of their key tech, so the judges respond very poorly to the idea. Next came Sithija – which can best be described as stripped down version of Google Apps for Business of Onedrive for Business. We checked out the test app: ironically, it was running on Gdrive at the time, though with funding and hardware they could have moved it to their own systems.

A team called the YNots showed up with and SMS subscription service that lets a person subscribe to certain companies, especially retailers. Vacatus came next: a startup indexing locations and services near those locations, and providing a platform for bookings for things so as to let people organize their trips to Jaffna. providing a sort of platform for bookings and so on.

Team Azers from the University of Colombo detailed a vehicle identification system that that can also track and allocate parking space. A very detail-heavy pitch, lots of numbers – not that we have anything against numbers, but we found guessing at the system’s algorithms more interesting, for not only does this identify vehicles by their numberplates, it also tracks color and can control toll gates and the like. As someone seated next to us remarked, it might actually be a very interesting system if integrated into government systems and apartment complexes.

Stock Watcher (or is it Stoke Watcher?) is here with a massively improved UI, discounting the multiple misspellings of their own project name. According to their description, the Watcher can broadcast stock reports via SMS and charge people on a daily, per SMS or monthly basis. They’ve got an admin panel where you can define what to watch, what criteria to alert you for, and so on and so forth.

As the day scrolled by, we saw a bus booking platform using SMS broadcasts, and following that, Team Trackler’s rather innovative tech-based effort to reduce the wastage of fruit, vegetables and other produce. The former had promise: the latter had hydration, storage monitoring, theft alerts and so on. The judges seem interested. There was, of course, another YEAP (Yet Another E-commerce Platform) – they seem almost mandatory these days – and the competition rolled onto the final few: Spacey.lk, FareSHareSL, Weconnect, Armates and Elite.

Spacey.lk ran into comparisons with They’ll be competing with real estate sites. FareShareSL is next. These guys came up with a backend for tuk-tuk companies, tying into the Googlemaps and Ideamart APIs to track vehicles and notify customers. We couldn’t help thinking that quite a lot of cab companies in Sri Lanka could use something like this.

Weconnect, if we understood correctly, is an inverse Foursquare of sorts: where instead of a person posting that they’re at a place, the place detects when a person’s inside.We’re not sure we like the social implications. Armates followed; however, their pitch didn’t seem to live up to their AR advertising tech. The perils of Powerpoint. Last, but not least, came Team Elite: a display + GPS system that displays upcoming locations on the bus, much like you’d see on a metro system in other countries, and throws in advertisements, creating both a public service and an advertising platform.

At the end of the day, most of these ideas didn’t make the cut; some perhaps due to poor concepts, but most, we feel, due to poor presentation. As Ruwindu Peiris of Stax, Inc said:

“Run it in your head. Firstly, establish a realistic goal and establish what you need to get there. Examine the number of clients. Say you have an app. You can get 5000 people using the app, but you need 18 months and 3 million in funding – salaries, hardware costs, the whole nine yards. Then figure out that you’re willing to give up 30% of your equity. The math becomes simple. Basically, you’re asking for 3 million rupees for a 30% stake – and if 3 million is worth 30%, the whole company as a whole is worth 10 million rupees.

Then you need to convince people that you are worth that much.”

Six teams have apparently managed to do that, at least for this stage: Elite, Red Kites, Tracklers, Strikers, Tuna Labz (no, we didn’t make that up) and Cyberknights will be going ahead with their projects to face another barrage, this time in Colombo. Until then, these six teams are kings of the mountain. We took our leave amidst both crestfallen faces and elated grins from the contestants. The Yarl Geek Challenge, Season 3, is done for the moment. Three cheers for the amazing community that made this happen: it’s sure given us a lot to look forward to – and perhaps set an example for Colombo hackathons to learn from.