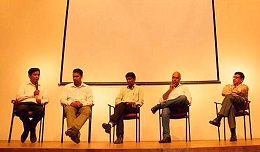 Since it was born in 1969, the internet has evolved constantly over the years. The next stage of evolution of the internet which we are now seeing coming up is: the Internet of Things.

What is the Internet of Things (IOT) you ask? Well in simple terms, IOT refers to things such as your fridge, air conditioner even socks, having unique identifiers similar to IP addresses and sharing data over the internet or a network. What’s the purpose? That’s what we went to find out – at the 1st ever IoT conference held here in Sri Lanka, organized by the Sri Lanka Export Development Board (EDB) at the NDB/EDB building on the 18th of February.

The event kicked off with Mrs. Sujatha Weerakoon, chairman of the EDB, taking the stage and delivering the welcoming address. She was followed by Mr. Mano Sekaram, CEO of 99X Technology and Vice President as well as Director of SLASSCOM. Mano spoke about a future that’s coming soon: a future where we’ll have more devices than people, with both being connected to each other. He then introduced the moderator of the day: Mr. Harsha Purasinghe, founder & CEO of Microimage. Harsha took the stage and introduced the IoT with a practical application: his new wristband, a piece of wearable technology, which was monitoring his health by transmitting data to a cloud service that displayed the information about his health in a meaningful manner, for only $99. “This is the kind of decade we are living in”, said Harsha as he spoke about how such a feat would have been impossible a decade ago and that new things such as cloud computing and big data were emerging.

He also said that, in the near future, things such as the projector and chairs in the auditorium, even vases of plants would all be connected to the internet and will be transmitting vast amounts of data, like his wristband.

Harsha then wrapped up his speech to welcome the 1st speaker of the day: Dr. Sankalpa Gamwarige, General Manager & VP of Engineering at Zone 24×7.

As he explained how IoT works using these examples, he also highlighted how it was important that an open culture of innovation was needed to properly implement IoT solutions. Of course, there’s challenges involved, a fact he made clear to the audience – the biggest being the revenue models IoT companies have adopted. The 2nd speaker of the day, Vipula Liyanaarachi (Sri Lanka Manager of Motorola Solutions – Engineering) expanded on this, unveiling a rather technical but informative presentation showing an IoT model.

What do you need for an IoT object? A unique identifier and:

a)    A communication link which can be wired or wireless.

b)    A sensor, such as a light or gas sensor. Vipula mentioned that, more sensors will appear in the future since we can’t measure all things digitally yet.

c)    A transducer that will relay information to the user such as an LED Display, but it can even be an air conditioner or a street light. This may not always be necessary if the device doesn’t communicate with a user, but it does involve a lot of thought which presents an opportunity for innovation, mentioned Vipula.

d)     A processor. There is a vast collection of processors that can be used; the right processor depends on the processing power and energy requirements of the application. It can even be a simple protocol convertor so it may not always be a processor in general terms.

e)    A power source such as a battery or a super capacitor. If IoT devices are being used outdoors then they can also use renewable energy sources such as: solar power and even daily activities such as jogging (Yes, apparently we do have the technology for that). Due to hardware platforms getting cheaper (thanks to open source options such as Raspberry Pi and Arduino), getting into IoT is now much cheaper than before. Possibilities?

Dr. Srinath Perera, Director of research at WSO2 came next. He spoke of how big data (it’s almost a buzzword now) and IoT can be used to optimise decision making, going deeper into to analytics behind all this. There’s three stages when it comes to understanding data, in his opinion:

a)    Know what happened, which involves basic analytics and visualizations such as graphs.

b)    Find out why that happened, which involves data mining and building models.

c)    Make forecasts for what will happen, which involves Artificial Intelligence.

Afterwards, Srinath mentioned that AI will play a big role in the future so students should focus on it and dropped an interesting joke, “If you can explain it then it’s an algorithm, if not then it’s an AI.” Before concluding his presentation, Dr Srinath shared two useful cases involving IoT and data collection. One used sensors to collect traffic data, which could be used to predict traffic (CMB police, we’re looking at you here). The other used sensors in the shoes of footballers and the ball to identify statistics such as shots taken at the goal.

The 4th speaker of the day was Dr. Ajith Pasqual, Head of the Department of Electronics & Telecommunication Engineering at the University of Moratuwa. Dr. Ajith explained the things necessary to move into the IoT industry:

Sri Lanka does indeed have the necessary resources needed; Zone 24×7 and Motorola were prime examples. Apparently you don’t really need to do a course on electronics at a university to gain the knowledge the graduates have: in any case, according to Dr. Ajith, only 15% of the electronics graduates are actually employed in the electronics industry.

Dr. Ajith then moved onto talk about the electronics manufacturing facilities, at factories we have here in Sri Lanka, which are at international standards. However they have a lot of spare capacity as such we need designs that can use this spare capacity, which he hopes will come with the push towards IoT. Afterwards, Dr. Ajith spoke about a proposal that was the government recently accepted – the creation of an Advanced Electronics Design Centre aimed at moving us towards electronic design and manufacturing industry, as well as future plans for said centre – including funding startups. Sounds interesting? He also listed out a few IoT-related areas for startups to get into:

The 5th and final speaker of the day, Nihal Kularatna, Senior lecturer from the University of Wakaito in New Zealand, was welcomed onto the stage shortly afterwards. In-between, Harsha pointed out a crucial point: that Sri Lanka had already missed the semiconductor market and the IoT market should not be passed by. Nihal began his presentation by confirming what the previous speakers said: one doesn’t need to complete a Masters or Ph.D. program to start creative and innovative work. He shared the story from the early days of his career, when he built a DC power supply using simple electronics – the project was published in a British journal. He spoke of how we can learn many things from the world around us, and how not to begin something simply because it looks like a bright idea – rather, to identify a need and create a solution to match. Like (to use his own examples) poor battery life in phones.

After emphatically stating the value of constantly re-educating oneself, he went on to highlight some ways which he believes would allow us to develop Sri Lanka into a nation for wealth creation:

a)    Universities come out of the “frog in the well mentality”

d)    Hire recruits based on skills instead of paper qualifications

f)     Recognize human achievements based on national and international norms

g)    New graduates should be inspired to be lifelong learners

With the presentations concluded, the panellists took to the stage and the panel discussions kicked off with Harsha asking the panel: “Can we develop a practical IoT application here in Sri Lanka?” The panelists agree that indeed we can but we need money and a company with a proper business plan to maintain the application. Later, an audience member asked as to how we can develop proper business models. Nihal replied that there should be a commercial arm at universities which can act as interface between industry experts who can correctly pinpoint the finances behind an idea.

Dr. Pasqual added that since software companies have access to European and US business models they can share the knowledge as to how business models are created in those countries.

The spotlight was then cast once more on Mano Sekaram and Harsha Purasinghe in their final remarks: they agreed that nowhere in the world does the government lead the business; it must be led by the industry and academia – but the government has the crucial role of facilitating a proper environment for them. The future, stated Mano will be dominated by entrepreneurs with solid business plans – not traditional companies. And the industry, said Harsha, needs to innovate without waiting for the government to babysit them – if everybody played the waiting game, nothing would ever get done!