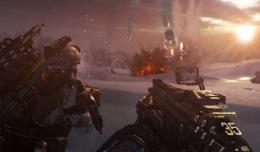 You’ve probably played or at least heard of the Call of Duty franchise. (If you haven’t, time to come out from under the rock you’ve been hiding under and go take a look at it). The latest iteration of the series, titled “Call of Duty: Advanced Warfare” puts the player in the year 2054, in the boots of Private Jack Mitchell of the United States Marine Corps.

As the story progresses, you find yourself with a number of technologically advanced weaponry and tools at your disposal, most of them straight from the pages of some not-too-distant novel. Therein lies the question: how close are we to this stuff??

Advanced Warfare’s exoskeletons function like a cross between Iron Man’s suit and Matt Damon’s exo in Elysium. Apart from packing a mean left hook and punch, it also allows you to leap over small distances, tear doors off their hinges and cause all kinds of trouble.

While being a far cry from the suits we have today, the exoskeleton has been in the works for decades. The US Military, along with several private  sector companies have been working on methods to improve a soldier’s effectiveness on the battlefield by giving them more speed, stamina and strength.

Thus far we’ve seen many prototypes, probably the most viable being TALOS – The Tactical Assault Light Operator Suit. It has one purpose; to boost the effective strength and endurance of special forces personnel, in order to offset the increased weight of additional body armor. Basically float like a butterfly, sting like a bee.

The XOS 2 Exoskeleton is another suit worth mentioning. Built by Raytheon, the suit is developed explicitly for the US Army. Initially demonstrated in September 2010 at their research facility in Salt Lake City Utah, the XOS 2 effectively increases the human strength, agility and endurance capabilities of the wearer via high-pressure hydraulics, giving him/her the ability to lift objects at a ratio of 17:1 (actual weight to perceived weight). This further allows lifting of heavy loads repeatedly, without worry of exhaustion and/or injury.

FORTIS, developed by Lockheed Martin, is another example of Exoskeletons. Rather than to be sent out into the heat of battle, FORTIS allows the wearer to carry more equipment and work longer by transferring the weight they are carrying directly to the ground through a series of braces that wrap around an operator’s arms, legs and back. Think of it as the handyman’s suit.

In Advanced Warfare though, the player’s suit is able to make you faster for a short time, increase your health temporarily, spawns a shield in front of you, make you invisible and even let you hover in the the air. Judging by the fact that exoskeletons available at present weigh several hundreds of pounds and moving in them is akin to snail pace, there’s still a long way ahead to go.

If you’re a Looney tunes fan, you would have probably seen Marvin the Martian wielding a weapon he calls the “Illudium Q-36 Explosive Space Modulator” and threatening to obliterate the Earth. While it rarely seems to work for him, it does get us thinking, do such things exist?

In Advanced Warfare however, these things DO exist and you even have the pleasure of using it. Whilst not having a catchy name as Marvin the Martian’s weapon of choice, the EM1 Quantum Directed Energy Weapon and the plasma shooting EPM3 effectively destroy anything in its path. Obviously, to power something like that, you need battery, and lots of it. This is the achilles heel to DEWs. They burn through batteries faster than Roadrunner and Speedy Gonzales combined, making them useless on the battlefield.

In real life, US Navy has their Railgun. Utilizing the Lorentz Force, the weapon can launch a projectile that can exceed  Mach 7. It is the favored choice of the US Navy as it has a range of around 100 miles and doesn’t include an explosive warhead. It is also unbelievably cheaper, with a single 18-inch projectile costing around $25,000 (when compared to a regular missile which can cost anywhere between $500,000 and $1.5 Million).

By and large, a DEW requires a lot – and I mean a LOT – of power. Not to mention taking up a considerable chunk of space and weight. Even in game, the EM1 and EPM3 seemingly never run out of ammo, but do overheat requiring them to be fired in short bursts. Despite the advancements in technology at present, this kind of ray gun is still more in the real of of Star Trek and Unreal Tournament.

The game’s IMR is is a four-round burst assault rifle with a twist: instead of reloading ammunition, the gun literally prints 3D bullets and feeds it into the firing chamber of the gun. This would be a god send – if it were actually true. Imagine the soldier in the heat of war, running out of ammo. Pop in an IMR and he’s virtually guaranteed to never run out of ammo.

Unfortunately, real life brings problems – raw materials, power sources being a few of them. Sure 3D printing is all the rage these days, but the tech is still far, far behind.

If there’s one thing we’ve seen (pun intended) from futuristic shooter games, it’s the HUD. The Heads Up Display is what give the player (in game) and the soldier (in actual battle) the information needed to make split second decisions. Although having an ammo counter and a reload weapon prompt in real life seems a tad redundant, there’s plenty of technology headed this far. Forget everything else: look at the possible ramifications of Sony’s SmartEyeGlass embedded in a gas-mask-like helmet for soldiers. Most of the tech needed for a (reasonable) HUD is there – it’s now a question of bringing everything together into a package that can survive the battlefield.

I would say that with the exception of the exo-skeleton, Advanced Warfare does indeed present the player with more fiction than fact. How much of this fiction can become fact in the next 40 years is yet to be seen – after all, not so long ago, people considered a moon landing impossible.

Have an idea, suggestion of possible tech that we’ve missed? We’d love to hear from you.