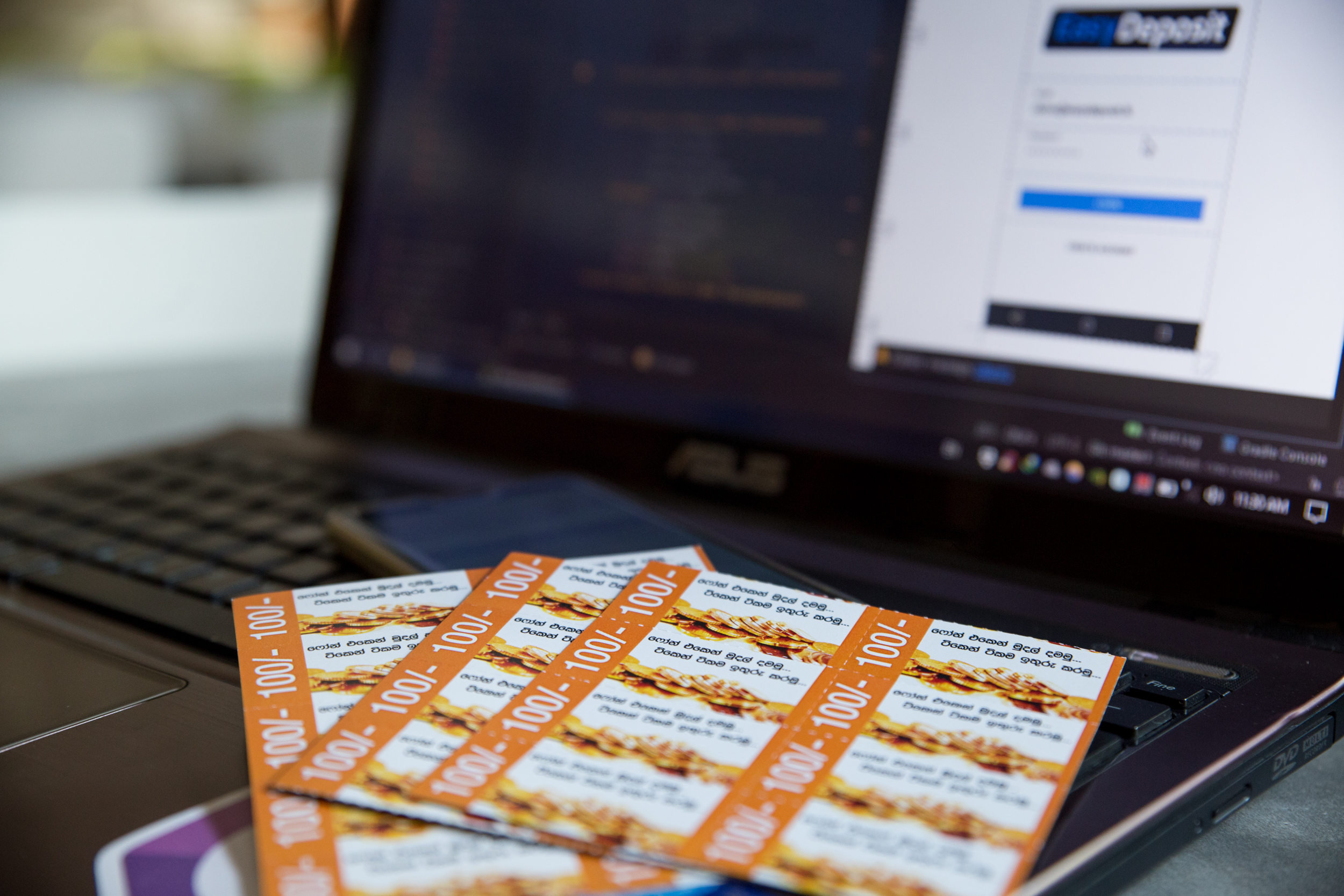 Some time ago, we brought you the 8 finalists of Sri Lanka’s first tech based reality show called “Kotiyak Vatina Adahasak”, essentially an idea worth millions. When we left off, 8 finalists were selected for KVA with the final few episodes due to air this month. From there, the top four ideas were selected and we too decided to see what exactly these ideas were. One such idea was Easy Deposit.

The product and the idea are put forth by Sunil Jayasinghe and Sanjeeva Pathirana. Think of it as a remote cash deposit mechanism. Initially conceptualized in 2011, the duo then decided to patent the idea in 2012 and also took the project proposal to the CBSL  (Central Bank of Sri Lanka) that same year to the Payment and Settlement Dept. In 2014, the product came in second place in the Islandwide Open Category in an exhibition organized by the Inventor’s commissions.

The idea basically is about depositing any cash and/or spare change you have collected for a while but without visiting a bank. Intrigued? Well I was. So I decided to delve further into the concepts that brought forth this idea. Sunil recalls how his daughter would leave some money at home to be deposited to the bank by her parents or vice versa. The problem was that the nearest bank was about 3-4 kilometers away. They would also end up spending the money on something or other, thus resulting in no savings at all.

It was here that Sunil put on his thinking cap and came up with the idea for Easy Deposit.

How does Easy Deposit work?

Well, think of how you top up your phone connection. You would go to a shop, give the cashier an amount of money, get a scratch card, enter that number and Presto! Your phone would be topped up.  Now think of the same scenario, where you replace your phone number, with your bank account.

Users would be required to register for the service (which is free of charge). Once registered, users can add their bank account numbers which would be stored in Easy Deposit’s database. Once you have any cash that you want to deposit, all you need to do is walk up to your nearest store, be it a grocery or a supermarket. From there, you give “X” amount of money to the cashier, and you will receive a scratch card. The scratch card would have a 4-digit PIN number on it. If you registered with a Feature phone, then you can simply dial a USSD code and enter the PIN number and your bank account would be credited that amount immediately. If you have a Windows, iOS, or Android smartphone, the process is made much easier as you can simply follow the onscreen cues to enter in the PIN and the amount will be deposited to your account.

Who Can Use Easy Deposit?

The target market or user base are those living in a rural community. These parties have no virtually no access to a bank close to where they live or the bank is around 3-4 kilometers away.

Based on the results of several test runs conducted by the team, they found out that people used the service when the bank was closed. Banks were either too far, open only for a limited time, or both. With working hours being 9AM to 5PM, a bank usually operates from 9AM to 3PM. This makes sense as jobs in Government or even private offices don’t exactly give you the leisure of stepping out of office to go to the bank unless require by the company itself.  These are work hours so no one can go to the bank. Then there’s the travelling cost incurred when going to and from the bank which directly affects the time spent on the road which can negatively affect your work hours.

Sunil and Sanjeeva then proceeded to add a 5% service charge to the scratch card as an experiment. To their surprise, despite the charge, people would still use the service. When asked why, they would simply reply saying that the service is still better than making the long trip to the bank during which time whatever money they were to deposit may actually end up being used.

Essentially, Sunil and Sanjeeva’s goal is to encourage people to save and also to deposit whatever spare cash they have, even if it’s a small sum, to the bank for safekeeping, rather than leave it to gather dust.

Apart from users, even Banks can make use of this system, Sunil explains. Banks can use whatever amounts they receive to increase their capital funding. Despite banks having attractive offers enticing people to deposit cash with them, if people cannot reach the bank, then all those attempts are futile. Sunil further went on to explain that a cashier at a bank can only process that many deposit slips at a given time. Furthermore, these slips are then process by a higher official to check. The slips are then stored for a period of 6 months. This costs the bank time, money and effort. With a system such as Easy Deposit in place, banks would use less electricity for example, have reduced levels of stress due to customer overloads and they would even save money on things such as printer ribbons. While these may all seem like menial trivial things, Sanjeeva adds that they all add up in the end to a significant amount.

Currently the duo is in discussion with two banks and are expected to launch the system along with the Mobile app by the middle of 2017.

They have applied for a patent and are waiting for confirmation Whilst that happens, they are also looking for opportunities to venture into the global market, more specifically south Asian countries such Bangladesh, India, and Pakistan.

We wish Sunil and Sanjeeva all the very best in their endeavors and may the odds be ever in their favor.