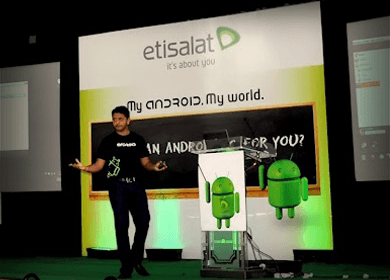 2nd May 2012, Colombo:   Athauallah Arangam, Akkaraipattu played host to the first Etisalat Android Forum to be held outside of Colombo recently, as the telco took the innovative idea to the eastern province. The forum titled ‘What Can Android Do for You?’ focused on newcomers looking to get their first taste of Android and understand what the Android Universe is really about and envision the possibilities that it will create. 350 enthusiasts attended the event; an audience comprised of students, professionals and business executives from the region.

Etisalat CEO Mr. Dumindra Ratnayaka commented on the forum saying, “The east is a burgeoning region for business in our country and areas like Akkaraipattu have seen enormous growth in recent times. We decided that the eastern province was therefore, ideal for our first Android forum outside of Colombo as the people in this region would benefit greatly from the possibilities and innovations that would come from the Operating System(OS). Following this success we’re looking to have more forums in other parts of the island as well.”

Etisalat pioneered the concept of Android Forums in Sri Lanka as a means of illustrating the potential that the Android Universe has to developers, business professionals and first time users, in the wake of the rise of this OS and the growing popularity of smart mobile devices. Following the success of the first forum near the close of 2011, Etisalat began the year with three more forums, subsequently deciding to take the idea to the east.

Smartphone penetration in Sri Lanka still stands at a very low rate, in comparison to other countries in the region. However, Etisalat’s efforts to introduce lower priced smart phones into the market are aimed at increasing penetration, and forums such as this one in Akkaraipattu allow consumers to understand the full impact that a smart device can have on their lives. It also empowers local developers and entrepreneurs with the knowledge and skill required to localize the technological offerings of the Android OS, a key factor in helping the operating system reach its full potential.