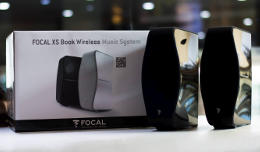 There’re some surprisingly high-end audio brands around Colombo these days – from brands that have entrenched themselves in Sri Lanka (like Yamaha) to slightly lesser-known audiophile gear from Boston Acoustics and AKG. Joining those ranks is Focal Audio, a French brand we hadn’t ever seen here until Redline Technologies set up a couple of demo units.

This is the Focal XS Book Wireless, which sells for Rs 70,000. Yes, that is an EXPENSIVE pair of full-range speakers. However, we did get to test them out (a couple of Santana albums in FLAC and Malukah at 320kbps), and they’re absolutely brilliant. The speakers project the audio well enough to clearly fill a medium-sized room, the sound sounds fully fleshed-out and detailed and Santana sounds like you’re sitting around a campfire actually listening to the man with the drums do his thing. Surprisingly enough (for us, at least), the sound stage projected by the speakers is very accurate, so you could sense quite a difference between Malukah (recorded at a home studio) and other recordings at larger studios.

Even Bluetooth sounds significantly better than what we’re used to. It’d go extremely well with a Playstation 4. Perhaps slightly less impressive is the Focal Spirit One, a pair of audiophile headphones costing Rs 45,000. While they did look classy, it’s a tad too expensive for our tastes, mostly made of plastic and it’d take better ears than ours to spot the difference in quality between this and some of the less expensive AKGs that Redline already stocks.

Focal Audio, while almost unknown on these shores, apparently has quite a following in audiophile circles – their France-based Focal – JMLab has quite a few speaker tech patents and a sizeable amount of R&D happening at all times. Apparently, Pharrell William’s track “Happy” was mixed on Focal gear. Their biggest claim to fame, however, is the Grande Utopia, weighing 570 lbs (260 kg) and standing over 6 ft (2m) high with customizable cabinets from Bourbon-Lancy. It’s reportedly considered to be one of the best high-fidelity loudspeakers in the world.

If you want a listen (and perhaps to argue the rather subjective pros and cons of music), drop by Redline while they have these on display. You might even find us orbiting these speakers listening to Malukah’s Halo tribute.