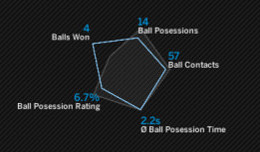 German engineering has long been the stuff of legend. Unfortunately for the Argentian football team, making cars isn’t the only thing they’re good at. Now, analytics has been the shadow of the sports industry ever since two men got together and decided to bet on who would win the next race, leading to everything from predictive tortoises to cheat sheets. Germany’s just stepped up the game a little: pre-Fifa, the German football team and German Football Association collaborated with software giant SAP AG on a custom match analysis tool capable of analyzing almost everything – from individual player metrics to team playstyles, ball control and even how players respond to pressure.

The software, called Match Insights, studies video feeds from on-field cameras to create extensive analytics that the German coach could use to build up the team. It’s basically Big Data used right. Players are tracked individually, and Match Insights, with its cameras, is capable of determining everything from player speeds to directional changes to ball possession time. Not only does it look at the German players: it’s also capable of looking at their opposition.

One of the biggest points of focus for the German team this year was speed. Using Match Insights, the team was able to analyze stats about average possession time and cut it down from 3.4 seconds in 2010 to about 1.1 seconds this year. That enabled them to react faster and play more aggressively, as seen in their crushing defeat of Brazil.

“Imagine this: In just 10 minutes, 10 players with three balls can produce over 7 million data points,” said Oliver Bierhoff, SAP Ambassador and manager of the German national football team.  “With SAP, our team can analyze this huge amount of data to customize training and prepare for the next match.”

So while the rest of us were watching the match on the telly, Match Insights was probably analyzing every move frame-by-frame as Germany put down Brazil in the now-legendary 7-1 win. It was probably watching through on-field cameras as Netherlands and Argentina went head-to-head to see who they’d face off next. Match Insights saw the match from almost every possible angle, perhaps hummed a bit, and then went straight back to the German team and spent some time telling their coach exactly what he needed to know about the opposing team: their playstyles, ball control, positioning – almost everything that could be written down and presented.

Probably. Or it could have been watching the replays. The software can extract data on other players and present it in the form of digital personas, much like a video game.

According to Aaron Ray, sports enthusiast and news presenter at E FM, this level of analytics is even necessary at times. Certain cricket teams are known to involve even physiological expertise to determine what sort of a delivery the bowler will produce next. Studying of a particular delivery of a bowler is also well known to the world of cricket – for example, if a spinner is difficult to handle for batsmen due to his variation in bowling, the opposition studies how he delivers the ball by watching hours and hours of footage of the bowlers wrist and bowling action, and the same goes for boxers.

No matter what technology is used, coaches and players can only predict an opponent’s move, albeit with increasing accuracy thanks to digital toons.

“Germany’s 12th player”, as some sites are calling the Match Insights tool, is still exclusive to the German team right now, but eventually SAP will open it up to everyone else. There’s apparently no public timeline, but Q4 might tentatively be a release date. Coaches can relax – they still need you to train the team. But thanks to Match Insights, your job might (eventually) get a whole lot easier.