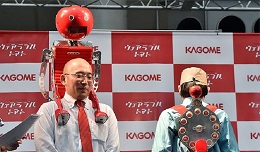 If you are an IFTTT fan then this one is for you, if you’re not, read it anyway.

IFTTT (if this, then that) allows users to create “recipes” that link various apps and services with very specific triggers. The company recently expanded the platform with three additional standalone apps and a rebranded flasgship app titled Do Button, Do Note and Do Camera, all of which are for iOS and Android.

For IFTTT, which was launched in 2010 with its web-based service that has generated more than 18 million recipes, the new Do suite of apps is big shift. The company’s flagship app, previously called IFTTT, will be rebranded to be called “IF.” CEO and cofounder Linden Tibbets said that this enables further development under the patronage of IFTTT, especially when it comes to new user interfaces like wearables and the Internet of Things.

Now onto the more quirky side of the internet.

With the Tokyo Marathon on the horizon, two food producers set out to fix a few problems faced by the marathon participants.

Japanese ketchup maker Kagome has designed an 18-pound tomato-dispensing backpack (yes you read that right). The device resembles a tomato-headed humanoid robot that sort of straddles itself onto the shoulders of a person, with an arm that deploys tomatoes to a runner’s mouth.

Why tomatoes you ask? Well apparently tomatoes are rich in nutrients like beta-carotene and citric and amino acids, and are easier to devour compared to the go-to snack form marathon participants, which are bananas.

The Japanese division of Dole which is the world’s largest fruit and vegetable producer have their own ideas on how to capitalize on the banana devouring with its own edible wearable.

The wearable banana consists of a small LED screen with sensors embedded inside the peel, which is then stitched back together. In addition to displaying tweets of encouragement and advising runners to eat more bananas, it also measures heart rate and race time. This year, two of the race’s 30,000 runners will have the chance to wear smart bananas on their wrists during the marathon. A Kagome employee will wear the tomato-dispenser during Saturday’s five-kilometer fun run and on Sunday, a Kagome-sponsored runner will sport a smaller version of the product.

Lenovo (who’s motto is For those who do), has indeed done something. They have been forced to remove a hidden adware program that was shipping on its laptops and PCs after users expressed anger.

Dubbed Superfish, the application was injecting adverts on to browsers using techniques similar to how malware operates. According to Lenovo ofifcials, Superfish was preloaded on to a select number of consumer models only. Superfish was designed to help users find products by visually analyzing images on the web to find the cheapest ones. Adware such as this is widely regarded in the industry as a form of malware because of the way it interacts with a person’s laptop or PC.

According to security experts, it appears that Lenovo had given Superfish permission to issue its own certificates, allowing it to collect data over secure web connections, known in malware terms as a man-in-the-middle attack.

Although Lenovo has said that it has removed Superfish from new machines and disabled it from others, it was unclear what the situation would be for machines where it had already been activated.

Any Lenovo users in the crowd? Better get this checked out.