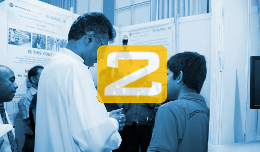 [box_dark]The list doesn’t end there. Seven stalls is barely half of the eighteen assembled there. Our round trip took us to more projects, including: [/box_dark]

Milk here in Sri Lanka has seen it all. Ksheera pi is a device that aims to automate the entire manual process we have in place here in Sri Lanka for checking the quality of milk, as well as reduce the time taken to test up to 1 minute. The device also requires very minimal training to use, since its user interface is similar to that of an old phone.

Ksheera pi however isn’t the 1st of it’s kind, but according to the team members, unlike other devices that do the same job, Ksheera pi would be significantly cheaper.

When we saw it, the system wasn’t completely automated: while the sensors did function properly and deliver the data about the milk’s quality, a manual valve system was used to send the milk to the sensors. According to the team members, the system is aimed at milk collection centres, but they’ll be thinking of a commercialization plan once they’ve sorted out the bugs.

Getting assistance from the authorities to fix some problems we face can be challenging here in Sri Lanka to say the least. OCPA aims to try and fix this issue by making it easy for everyone pass information about issues to the authorities and pressure them into fixing them.

The system consists of a trilingual Android app and a website. A user has to upload a picture of the issue using the app and a notice of the issue is sent to the relevant authorities (after administrator approval that is).

According to the team members, the system is currently in phase 1 where the system is basically working without any issues; in the future they’ll be looking at setting up partnerships with the authorities and the releasing the final version of the app.

This system tries to address fire and electricity surges. It’s Arduino & Raspberry Pi control unit that takes data from sensors in the various rooms of a building. If a fire breaks out in the building then, the system obtains the location of the fire from the sensors and extinguishes the fire after powering down all electronics, ONLY in that location.

Additionally, the system would have arrows placed in the building which would light up in the event of a fire showing the shortest evacuation path and would automatically notify the fire brigade and owner via SMS about the fire.

We only got to see a simulation of it in action, though. Apparently, it also monitors power consumption of the devices in the building as well as voltage fluctuations; should a power outage occur then it sends an SMS notification as well.

Project Bindu is a simple box with a USB port and analogue ports with the aim of replacing the books kids carry to school each day.

Using the Project Bindu box, teachers can assign assignments such as MCQ’s or essays to students as homework and if the teacher knows HTML he/she can even create some interactive assignments for students.

Additionally, apps can also be developed for the Bindu using C++ and must be Linux compatible. We saw 3 examples of such apps: a calculator, a PDF reader and a game, all of which seemed to work without any issues.

According to the team members, Project Bindu is primarily aimed at students in rural areas and would cost only Rs. 4000 which is a lot cheaper than the tablet-based solutions out there. The catch is, who’ll teach the teachers?

Finding items in supermarkets and the fastest way to get to them can be troublesome at times such as: after the supermarket finishes renovations or more commonly when we are in a rush.

Enter Rack Map, an app for supermarket customers that as the name suggests shows a map to show you the quickest path to the goods you want, depending on the priority of the goods you selected and distance to them.

The system sets QR codes for the different racks in the supermarket and uses those to navigate. Another version of the app for supermarket staff relates the barcode of items to the rack using its QR code,

Additionally, the system also offers analytics which shows data such as, which areas of the supermarket are most populated and most frequently purchased items. Sadly, we couldn’t see this system in action at an actual supermarket; however the app and the analytics system both seemed to work without any issue and the app for supermarket staff was able to read barcodes clearly.

Now here’s something for students all over Sri Lanka. The Sound Relay System aims to offer an enhanced learning experience by addressing 4 common problems:

The Sound Relay System addresses these issues with 2 apps: 1 for students which are available for mobile and laptops, another app for the lecturers. Using Wi-Fi, the lecturer’s app records him/her speaking and broadcasts a live stream to all the students which they can record.

[box_dark]But the list doesn’t stop here. Check out the final set – and the winners – here.[/box_dark]