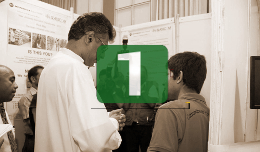 A little bit of backstory on this one. We’ve been moving in an out of the Motorola SLASSCOM Inter-University Innovation Championship, an annual competition aimed at instilling innovative, creative and entrepreneurship skills in undergraduate students. Over a 140 students came: out of those, 18 teams were given the go-ahead to show off what they could achieve before the finals.

Now obviously, a competition like this has a beginning and end – a prizegiving, speeches, hugs and tears, and all that – but we confess: we’re more intrigued by the ideas presented that day than who got the gold and silver. Here are the 18 submissions that made it:

Mission Narcotics is a simple video game which aims at tackling a serious issue faced all over the world: drug abuse. The game is aimed at kids aged between 2 and 17 and shows them the harmful effects of various drugs as they progress through the game. Right now, it’s only doing the effects of smoking. According to the team member we spoke to said that at the moment the game is for Windows PC’s and tablets, but they have no plans for commercialization at this time.

This project was a system that was aimed at replacing most of the devices that are being used by the archaeological department with Android devices, on which they could store their data digitally. It’s two-fold: there was one app for the researchers, and another, lite version of the app would be available for tourists, students and also history nerds like this writer. The “consumer” app would allow users access to historical data around Sri Lanka. Additionally, there’d also be a website which shows information about archaeological sites, hotel bookings, directions and transportation services along with a media gallery and social media connectivity. Definitely would be handy for anyone planning to visit any historical sites.

Like the name, this is one big system. Sadly we couldn’t see the entire thing in action, but we were able to see the main app working without issues. The final version definitely will be something interesting to both us and the archaeological department.

This system is actually more of a monitoring system than a healthcare system: it uses a webcam and a cheap raspberry pi computer to record a live stream of the current state of a baby. Yup, you read that right, folks:  this team from the Uva Wellasa University has made a baby video monitor. However unlike the various other models currently available, the team claimed that this one only costs Rs. 6000 since it didn’t have any expensive components. Their website, though, could use a web designer’s touch.

The Mobile Shopping System allows users to create a list of items they want to purchase and then displays the shops which are nearby, offer the lowest price and have the highest ratings. The idea is that users can do this via the site or the app. When we checked it out we noticed there were some bugs that needed to be worked out: according to the team, the system will be released once the bugs have been worked out.

Identifying plants and animals can be challenging unless you’re an expert at the topic. Enter, Jeeva, the system that aims to ease the challenge. All users have to do is simply take a picture and input it into the system and then a list of the closest match to the leaves or animal are displayed.

Interestingly, the team members claimed that the system uses a neural network which means that over time the system will learn, similar to a child. The goal of this system according to the team is to educate people on the value of nature and use it for research purposes.

Sadly, we didn’t get to see the entire system in action –  because it would  apparently take a good 2 years for the system to properly learn. The team also mentioned that in the future it would be a centralized system accessible by web browsers, phones, etc.

Skipping exercise is something we all are guilty of at one point: some of us a bit more than others. These are the people EXMS (Exercise Motivation System) is aimed at. As the name suggests the goal is to get people motivated into exercising.

All the users have to do is simply log into their Facebook accounts and play the gamified EXMS app while they exercise. Of course if you want you can invite your friends for a challenge: nothing like friendly rivalry to help one lose weight. Furthermore, EXMS also has an Android app which allows users to login and use machines at the gyms they visit. We actually saw the completed prototype of the system at the event, with everything in perfect working order.

The system involves giving disabled people automated wheelchairs which they can use to enter and navigate through the buildings, by simply entering their destination. The buildings are covered with nodes and markers are painted using ultraviolet ink telling the wheelchairs the routes they can use.

Furthermore, a central monitoring system exists that controls a group of 6 wheelchairs at a time to prevent accidents. According to the team members we spoke to, they claimed that any electric wheel chair can be used to implement this system at a cost of Rs. 20,000 each, but if needed, one can be made from scratch for Rs. 50,000.

[box_dark]Interested? Don’t worry: there’s a lot more where this came from. Here’s the next set of great ideas.[/box_dark]