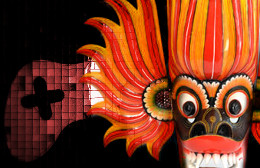 [quote]The life of man is poor, nasty, brutish and short – at least we get respawns.[/quote]

We discussed the challenges of a Sri Lankan gamer in a recent article here at Readme. In this article we are going to look at the current perception on the Sri Lankan gamer. As discussed earlier, gaming is a relatively new hobby/entertainment medium in Sri Lanka. Its cultural impact as well as the social impact is largely un-audited and un-recorded. However, being gamers, we all have a good idea about what others think about us.

Recently I was at the wedding of one of my best buddies at school and the old school gang met up. Among the group of 5-6 guys, there were only 2 gamers (including myself). The question from one of the non-gamers came up, “Do you guys still play games?” and the inevitable “yep” answer was given. So began the ridicule for us 2 with “apooo still like kids”, “get a life” and some other comments which can’t be mentioned here. It’s not the first and most definitely not the last time I would be hearing these words.

Before finding answers as to how we can tackle this, we should see why gaming is seen as a hobby/entertainment medium unfit for grownups and young adults. You already know how we think: now let’s see how they think.

The Core of the Problem

The first problem comes with the generation gap. The majority of the adults, including my parents, aunts, uncles and almost all adults who are over 40, either do not really know what gaming is or they are blindly opposed to it. Why? This is the million dollar question that gamers have to find answers if they want to be accepted as normal beings and not addicts or time wasters. Majority of the older generation never got the chance to work with computers. Computers became popular after 2000 –  it’s only in the past few years that they have gained a lot of traction among Sri Lankan consumers. This lack of exposure to computers and more importantly lack of proper knowledge about computing and its eco system is the main reason for the misconception regarding gaming. People jump to conclusions on word of mouth or some biased articles blaming video games for violence. It’s human nature to oppose and reject the unknown, which is exactly what’s happening to the gamer community.

Similarly, a considerable chunk of the newer generation also does not see gaming as a positive hobby. They think it’s too childish or immature to game. In my opinion they simply think of every game as Mario or Call of Duty. The reason is they may have played a game or two and generalize all the games as childish and immature.

Why only games, Not movies and other hobbies?

But in reality games are a far broader medium that have impressive capability to project human emotions and make the player affected by it. As with everything else, gaming can also be abused, hence the age classification for gaming .In Sri Lanka, there is no age classification for games.  (Then again, we don’t even classify movies properly – you just get adults only and everything else).

Everything we get exposed to does have goods and bads depending on how we use them. Children can sink countless hours into movies or any other hobby as same as they do with gaming. It’s up to the parent to make sure they don’t spend unnecessarily longer periods on their hobbies. I admit, there is a problem of children getting exposed to games that are not designed for their age, but that should either be handled by the parents or the legislation system. Completely cutting off the entire gaming activity is plain wrong. It’s like banning cars because of accidents.

Games: More Than Meets The Eye.

Games have far more potential to affect the human thought process due to their immersion and interactivity. This is why games like Minecraft and Kerbal Space Program are incorporated into the education system in some countries. In my view, this trend would continue to improve when people realize the benefits of gaming. Studies have already been performed to establish these facts. Apart from creativity they are very effective in delivering a message to the audience compared to movies or novels. Take the case of the guy who created a complete, working CPU inside Minecraft – without any of the complex training at Intel or AMD or any of the specialization that goes into designing processors.

The technology used for game development allows extremely complex emotions and interactions to be presented to the audience. From full budget games like Heavy Rain, Beyond Two Souls, Last of Us, The Walking Dead, Mass Effect etc.  to simple Indie titles such as To the Moon and Dear Esther have all been great examples of how powerful a medium games are when it comes to conveying a deep message or human emotions. That is why sometimes creators feel the backlash from gamers when a games’ plot does not conclude too popularly. It was easy to discount this criticism as childish and immature. But on the other hand, it shows how passionate the audience is towards the product. It’s a testament to the story telling power of games.

[quote]A gamer lives a thousand lives before he dies… the man who never games lives only one. [/quote]

In summary, we gamers are seen in a negative light in the society, but I hope they would read this and at least see what games are really about. It’s not just a silly activity to pass time, it’s a far more mature hobby that can shape a human mind. As with everything else, if it’s not controlled or used out of bounds, it would of course cause adverse results. But singling out games for its bad usage is extremely unfair:  we would simply be missing a great opportunity to for intellectual development and creativity of the next generation. It’s like outlawing scissors because you can stab people with them.