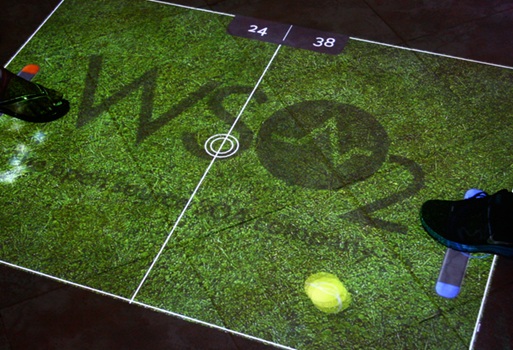 Kreyonic is all about digital media. They made a name for themselves at Linea Aqua’s 10th Anniversary, where a collaboration with Cyber Illusions turned an otherwise normal dance into a high-tech vision. They’ve got some (literally) huge projects in their portfolio – including touch-walls, Tron-like entrances, and a game of ping-pong you can play with your feet.

This time, they’ve turned their attention in a different direction: interactive learning experiences for growing children. They call it Leamo. From what we’ve seen, it’s a fantastic concept. Hook up your i-Device to a big screen – such as the TV or a projector – and this app automatically identifies specially designed cards and uses them to give kids a thoroughly interactive kindergarten experience.

Leamo is, in truth, an augmented reality experience. A-for-apple, C-for-cat identification, counting games, picture stories – it’s a rather elegant way to use mobile tech to boost early education. The app praises your kid when he/she gets it right and gently corrects them when they do something wrong. That’s right –  instead of giving your kid your phone to chew, break and possibly swallow, you could actually use it to educate them. All that’s needed is an iPhone or iPad – and a screen. Leamo uses your smartphone’s camera to detect the cards that are placed in its field of view. 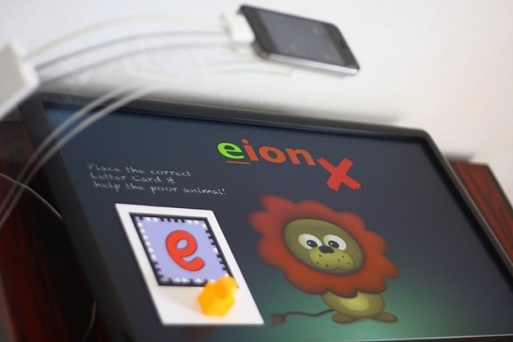 This app can also be extended with “Leamo applications”, each of which have their own set of physical cards. Kryonic tells us they’ve got a whole host of Leamo applications in development – from the alphabet to the zoo, complete with recorded voices for feedback and guidance.

According to the developers, the core system of Leamo uses frame markers and marker detection techniques similar to most augmented reality applications, with one key difference: instead of showing users an augmented view through a display, like in the Nintendo 3DS, Leamo uses marker detection tech to gather input from physical, real-world cards that the child can manipulate with far greater ease.  And it doesn’t rely on special hardware. Sure, for most Sri Lankans, an iPad or iPhone can be special hardware – but Leamo basically uses a normal phone camera to do its magic. There’s no reason why it shouldn’t come out for more common devices. In fact, Leamo would gain more push if and when the developers release it for Android, which offers a generally cheaper solution compared to iPhones. After all, a cheap Android smartphone can be found for as little as Rs. 13, 000. They’re also working on a portable “Leamo box” with a built-in projector – you just have to plug in your phone and run the app. Now that could seriously catch on.

Either way, it’s quite rare to see such a unique, educational use for the touch devices we use every day, especially from a Sri Lankan outfit. More importantly, it’s rare to see such a concept implemented so well, and it’s pretty much one of the most advanced and effective e-learning solutions we’ve come across. Head over to www.getleamo.com. If you have an iPad or iPhone, Leamo’s free. It comes with two Leamo applications. It even does fill-in-the-blank quizzes. How can you not like it!