In our previous article, we brought to you one of the finalists from Sri Lanka’s first Tech Reality Show “Kotiyak Vatina Adahasak”, essentially an idea worth millions. Today we’ll be looking at another of the final contestants and their idea. Meet KingRoder and their product Easy Drilling.

Conceptualized in 2008 by R.M Aruna Prasad Keerthirathna and A.M Pubudu Nandana Bandara, the product had no exact title but it’s description was a Laser Beam Guided Drilling device. They submitted the product to competitions such as Junior Inventor of the Year and Intel’s ISEF competition and have been winning awards for it ever since.

What exactly is Easy Drilling?

Well, the title should pretty much explain everything, but just in case it doesn’t, here’s what it does. It’s essentially a circular metal device that locks into place on an Industrial drill. The device has 3 laser emitting diodes that when activated form a cone. The point of the cone is then used as a guide to assist the drilling process. Throughout the history of the device’s lifecycle, it has undergone numerous changes and improvements to bring it to the state it is in now.

Apart from acting as a laser dot for your drill, the device can also measure the depth of a drilled hole to make sure that the nail or screw that should fit that hole is the correct depth and length. The main concept behind this idea is that people can’t exactly see where they’re drilling. In addition, there’s no way for an operator to know if the drill bit is fully functioning or whether it needs replacing or whether it will break or not.

Who can use the Easy Drilling device?

The device is primarily aimed at industrial use. Usually if you take a workplace that involves drilling, the process is not 100% accurate as the drilling relies on the experience of the person operating the drill. These people usually spend countless hours in the process and sometimes waste time and effort to get the job done on the dot (pun intended). With the invention by the Drill Team (our pet name for Prasad and Pubudu), even a novice user can use the drill to a much greater accuracy than previously thought possible and optionally for home. Even if you’re a home user, you can get one for yourself as well, but the main aim is industrial use. For further assistance, the device would also have in built LEDs for low light situations as well. 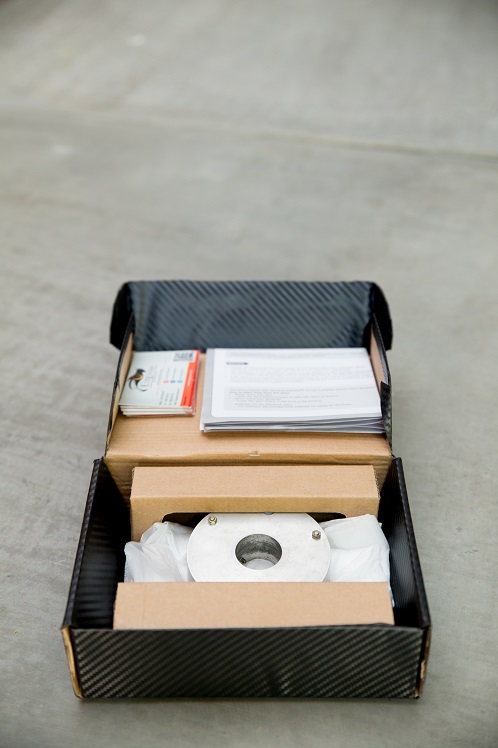 In addition to the device itself, Prasad and Pubudu have also developed a mobile app as well. The app connects to the device via Bluetooth and actively monitors parameters of pressure, RPM and temperature. These three factors, they say, are the main reason for a drill bit to break during operation. The application can monitor the pressure level applied to the drill bit and alert the user if the pressure applied is too much and will issue a warning if the drill bit is about to break. It will also monitor the health of the drill bit and calculate the life span of the drill bit by taking into account the level of pressure applied. The same holds true for the temperature as well. If things are getting too hot to handle, the app will alert the user.

Thus far, according to the duo, there are no similar products or possible competitors so far in the Sri Lankan scene. There is however one competitor in the global scene but according to Prasad and Pubudu, the Easy Drilling device is far superior in terms of features and drilling accuracy.

The platform is not only for drilling though, Pubudu explained. When developing the distance measuring API, the duo used theories from Trigonometry to achieve accurate results to come up with their own formulas. As such, they have also devised a small ruler like device that can be used in tandem with the drill when drilling holes that need to fit a certain depth. If you wish to drill a hole that is 2CM in depth, simply set the ruler to 2CM and aim the laser to the point where you need to drill the hole. The laser dot will expand in a circular shape outwards from the point of entry. The point when the circle reaches the point set by the ruler is the point you know that the hole you drilled is according to the depth you wanted. As you can see, this is some pretty advanced trigonometry in place here.

Prasad and Pubudu are quite eager for the future with numerous plans in store for the device. From an industrial point of view, they are looking to add the ability for the device to operate on solar power thus making it easier to operate without the need to keep changing or replacing the batteries in the device.

Perhaps the biggest plan they have in mind is with regard to the distance measuring API, where they are looking to make it available for or medical use and also for school use. They explained how the API can be used to measure UV levels in your skin to see exactly how far the UV rays penetrate your skin. Furthermore, they are also looking to make the API open source or as a trial where basic features will be available for free but if you want to use more features or modify the API to your need, you would have to purchase it from them.

Overall, another worthy idea from this competition, with a lot of potential. We’ll see what happens in the following rounds and see if Pubudu and Prasad can drill their way towards victory.

Good luck to all, and may the odds be ever in your favor.