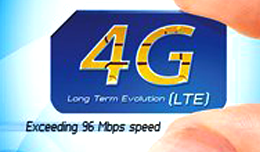 Mobitel’s ramping up. They’ve just made a new addition to their services: a 4G-LTE network on par with what most other countries are using at the moment. Right now their service portfolio runs the gamut from FD LTE, DC HSPA+, HSPA, UMTS to lowly 2G. That’s pretty fast, considering First-World countries like the UK are also new to 4G.

The 4G-LTE tech that Mobitel employs is considered an upgrade to existing 3G services: it uses the same principles and basic technology, with certain network upgrades and different transmitters and receivers.

Of course, this news isn’t exactly unexpected. Sometime in May 2011, Mobitel announced that their 4G-LTE trial yielded 96 Mbps on the downlink – while we at Readme have yet to benchmark or record this process, this would be the first time in South Asia that such speeds have been reached using an LTE network.

Quoting to the official press release: “Mobitel will be able to yield the best out of the mobile 4G/LTE services with the power of it’s parent company SLT’s extensive fibre network which will be beneficial to the country’s future. All these investments are part of the operator’s efforts towards leading the development of the country’s ICT infrastructure in keeping with it’s image of being the National Mobile Service Provider.” From the Readme offices: we’ll be sure to follow the 4G developments and test them once they’re out in the field.