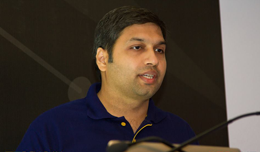 If you have a new idea, then chances are many people around you will recommend that you build a Minimum Viable Product or MVP. Why? Because with an MVP, you will get a clear understanding as to whether your idea will actually work. But how exactly do go about building an MVP with the least amount of resources? This was what we learned from Naresh Jain, a Tech-Startup Founder, and Agile/Lean Evangelist as the resource person. He spoke about the concept of the Minimal Viable Products along with a few case studies.

Speaking at DevDay 2015, Naresh opened his talk with a few examples of Indian startups. One of them is about a startup called Green Light, which was initiated with a goal to make people of rural areas use solar lighting. Through their market research, they have come to know that kerosene isn’t either expensive or hazardous. Villagers didn’t want new technology. People didn’t want solar panels for houses but at the same time, people wanted a way to charge their mobile phones. Which resulted in them pivoting their initial idea and building solar phone chargers. So what you really have to get out of this is this mantra; “Learn, Adapt and Pivot”.

Now that was a charm, most startups fail. So is there a cheaper and a better way to do minimum viable product? Enter the Lean Startup methodology.  It’s a method that a startup can use to actually shorten their product development cycles by incorporating business-hypothesis-driven experimentation, iterative product releases, which in other words a validated learning process. As he explained, the problem is that most companies which follow the conventional methods build and run it for 6 months.

“You need to sell before you build” – Naresh Jain

Next he moved on to few case studies that won in the journey of MVP. The two popular examples, Zappos and the story of Dollar Shave Club. What’s interesting about these two startups is that they did it right. Well, in the case of Dollar Shave Club, it was just this YouTube video that went viral and a landing page to take in the subscriptions. That’s it and they didn’t even have the razors in hand as such. This is a safe fail experiment.

That gave the start to one of the key points of the session, Safe Fail Experimentation. And, it’s play time, not really, a group activity, though. He asked the audience to group up and come up with a model to validate a certain solution that we came up for a specific problem. The problem was to design the tragic system of the busiest intersection. We heard many solutions. Indeed, we too suggested some, which included implementing flyovers, combination of roundabouts and traffic lights, and even avoiding the intersection joints as much as possible. Now was the time for validation. Again a bunch of suggestions and this was how they actually did it.

Next he played a clip from Simon Sinek’s TED Talk, “The Golden Circle”. We highly recommend you watch it if you haven’t already. Who knows whether this would change how the way you think and look at things.

To summarize things up about the golden circle; ‘Why’ is the vision, which you don’t change and rather sticks on to it. ‘How’ is your strategy, this should be changing throughout. ‘What’ is the product or service that you offer. That brought to the end of his session. Wrapping up, his talk focused more on case studies and examples to highlight the key points and takeaways in the topic of MVP. If to recap them, they’d be: “Action precedes Clarity”, Identifying the Distributing Channels is important, Safe-fail Experimentation and last but not least the concept of the Golden Circle.