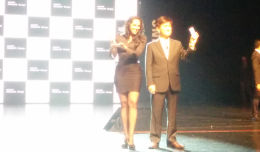 After being the hot topic at this year’s MWC (Mobile World Congress) held in Barcelona, Spain, Samsung launched their flagship Galaxy S6 and S6 Edge in Sri Lanka. The event, held at the Nelum Pokuna, was all about the glamor and prestige.

Despite a few technical difficulties, the event kicked off with an intro video showing scintillating images of a yet to be named device. As the lights dim, all eyes are glued to the screen and there is pin drop silence. On-screen a narrator asks, “What’s next?”

The video finishes and we see a portly man walk on stage. He is Youngmin Shin, the Managing Director of Samsung in Sri Lanka. With a well-rehearsed and pronounced “Ayubowan”, Youngmin speaks about how Sri Lanka has improved with regards to technology and how Samsung’s focus on innovation brings the future in mobility. The result of years of R&D, the Galaxy S6 and S6 Edge are the results of this innovation providing new features and a superior experience to anything else in the market. I guess we’ll just have to take his word for it.

The lights dim again and the audience is plunged into darkness. A mixture of wheels and cogs are heard and we suddenly see a figure appear from right out of the ground. Ok well maybe there was a hidden stage platform and maybe we like to be a bit dramatic. Out of the fog comes a figure. It’s the former Miss Sri Lanka, Stephanie Siriwardhana comes is on stage. In her hand, she hold the Samsung Galaxy S6. It’s sleek, sexy and beautiful, she says, and we agree (with regard to both the phone and her). 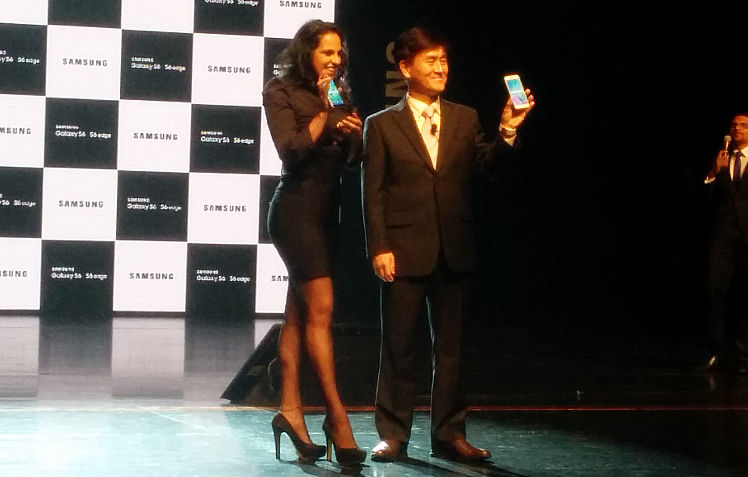 She is then joined by Youngmin Shin who presents her with the Galaxy S6 Edge, and the two of them talk about the two devices especially with regard to the battery. Youngmin Shin goes on to explain about Samsung’s revolutionary technology that gives you 4 hours of regular usage via a quick 10 minute charge. The duo then pose for a few photos and the media (ourselves included) indulge in a little flash photography.

Next to appear on stage is Kalpa A. Perera who holds the position of Head of Mobile, Samsung Sri Lanka. He seems very excited and talks about the design of both the Galaxy S6 and S6 Edge, praising its design and innovative technologies. The audience is then treated to another video showcasing those exact traits. From what we’ve seen online, we have to admit, these are indeed gorgeous looking devices. Apparently they heat the glass to 400 degrees Celcius to get the cruves.

Kalpa is replaced by Nigel Adams, who is the Product Manager of Samsung Sri Lanka. He speaks in great detail about the hardware used in both the S6 and S6 Edge. Both devices use Samsung’s Exynos chipset (in this case the Exynos 7420) and are powered by a Quad-core 1.5 GHz Cortex-A53 and Quad-core 2.1 GHz Cortex-A57 CPU backed by 3GB of LPDDR4. The display (mentioned above) sports a QuadHD 1440 x 2560 pixels resolution with a 577 ppi pixel density, which is they say is “77% better” than the display used on the Galaxy S5. Several comparisons are done with the S6 and the “LO” or “Lovely Opponent”, aka the iPhone 6 Plus. Night time scenes, videos, and fast action photography are some of the examples. We’re told a bit about their VR project and Samsung Pay as well. 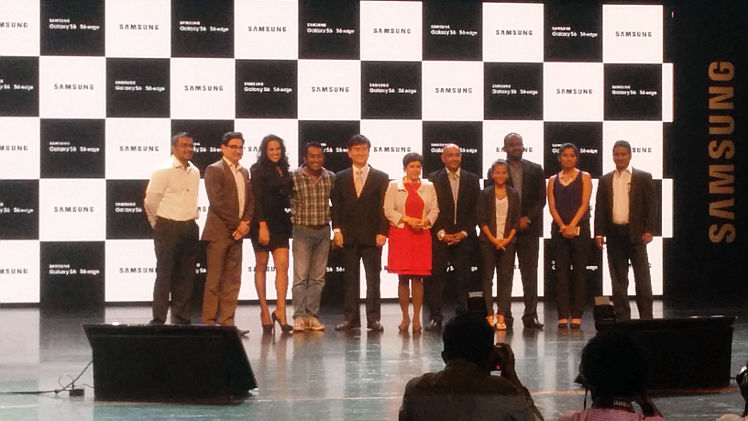 While the rest of the audience filed out of the hall and headed towards the food, we headed in the opposite direction to the demo area. 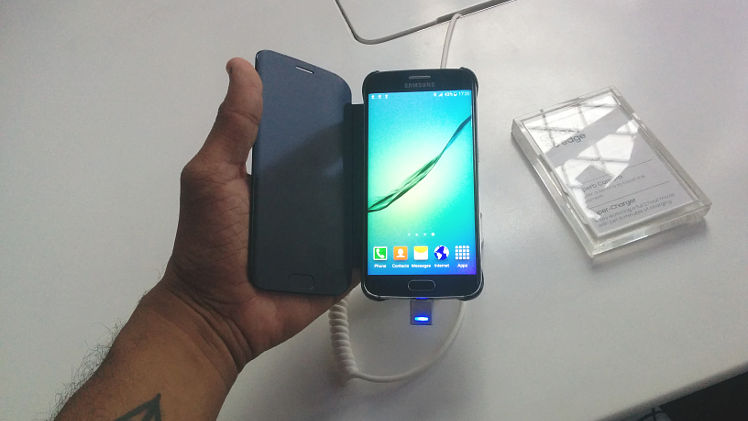 There it was. In all its glory. The Galaxy S6 and S6 Edge. It was immediately clear that Samsung has indeed upped their game. Both devices look classy and elegant and feel sleek in the hand. We played around with the operating system, which is Android 5.0.2 Lollipop, and indeed the phone responded immediately. Animations and transitions were smooth and fluid and try as we may, we simply could not the device to lag. Not even when we opened every single app on the phone.

The S6 Edge’s edge was all the rage. You can use the edge to display 5 of your favorite contacts and assign each one a specific color. Any and all notifications from these contacts are shown via a tiny LED located at the back of the phone. In addition, the Edge’s edge also shows off a subtle color grade when the phone is kept face flat to notify users of any activities such as calls and emails. But what really made it good was how the edge took the (stale?) design of the Galaxy series and made it look like a new machine.

The Samsung Gear VR for the Galaxy S6 Edge was also on display and it would be a shame if we didn’t test it, so we did. I had recently obtained a Google Cardboard so I was familiar with mobile VR technology, but the Gear VR was somewhat of a step ahead. Samsung’s wireless charger was also on display; the devices resembles a flat saucer and works only with the Galaxy S6 and Galaxy S6 Edge. 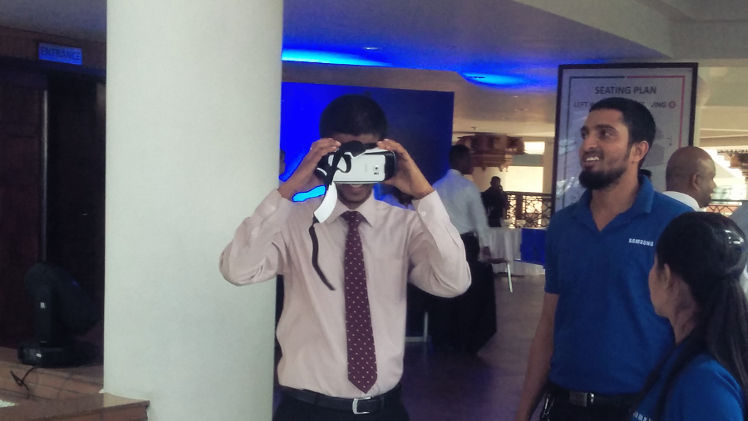 Both the Galaxy S6 and Galaxy S6 Edge will be apparently available for sale from mid-April and are priced at Rs. 114,990 and Rs. 134,990 respectively. 135 thousand rupees is steep, but as with all Samsung flagships, we expect prices to drop really fast a couple of months after the initial market launch.