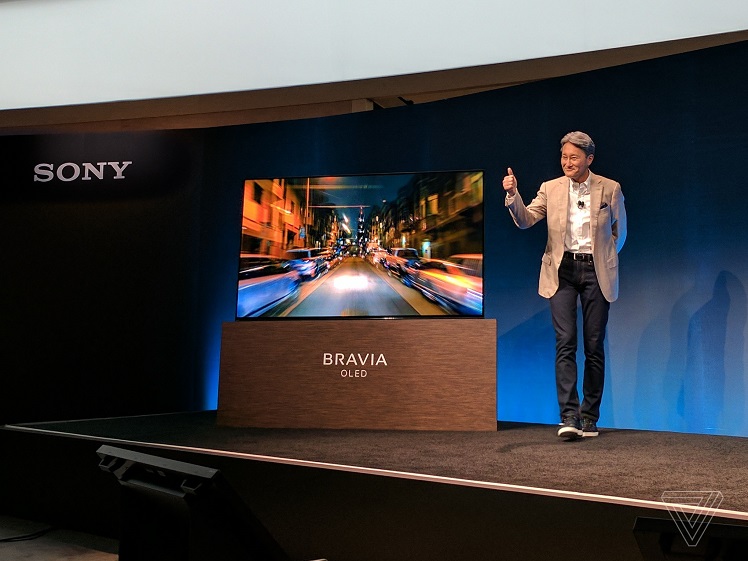 Smart TVs have been around for a while and 4K Smart TVs too have become mainstream. Adding to this list, Sony revealed their XBR-A1E Bravia TV at CES 2017. The TV features a 4K OLED panel and is currently Sony’s flagship TV of 2017. In previous years, OLED Panels have been made popular by LG with other TV manufacturers just focusing on LCD panels. Now with Sony entering the fray, we can expect some interesting competition to take place. ’

According to Sony, the shift to OLED panels allows them to manufacture TVs that offer a significantly better panel that boasts better black levels, rich and lifelike color, dynamic contrast, blur-less image, and a wide viewing angle. It should be noted that Sony isn’t actually making the OLED panel. Rather, that task is most probably carried out by LG Display, a completely separate entity and thus, has no connection with LG Electronics. However, Sony has declined comments on the actual manufacturer of the panel.

In terms of features and specifications, the Sony A1E Bravia series supports Dolby Vision HDR, powered by a chip called the 4K HDR Processor X1 Extreme. Build and aesthetics wise, the Sony A1E is remarkably thin meaning that a lot of the TVs internals had to be relocated to the fold-out stand around the back.

If you do happen to purchase one of these TVs, the first thing you would notice is the apparent lack of speakers. Rather than have conventional speakers, Sony opted for what they call Acoustic Surface sound technology. It basically takes advantage of the OLED’s backlight-less structure and thus, the entire screen reverberates with sound emitting from the screen itself.

According to Sony, this method produces a wide sound and image synchronization from all angles, even off to the sides. Although if you’re forking over for a TV like this, chances are that you have or at least plan to have a kickass sound system to go long with it.

Apart from the technology of the OLED Panel, the Sony A1E Bravia series also run Android TV. You can control it with the Google Home speaker, download a plethora of apps from Google Play, or cast your favortive content to the TV via your smartphone, tablet, or PC. In addition, Sony’s PlayStation Vue internet TV service will also have its share of the limelight.

The Sony A1E Bravia series will be available in display sizes ranging from 55” to 77” sizes but Sony has yet to divulge information regarding pricing. Nonetheless, we can pretty much assume that it won’t be cheap. For example, LG’s OLED TVs start off from $2,500 for the 55” and scale up to a whopping $20,000 for the 77” Signature G6 TV. No launch date has been provided either but if the rumors are true, we can expect a launch towards Spring. You can click here to learn more about Sony and their OLED technology.

What do you think of the new Sony A1E Bravia lineup? Want one? Love it? Hate it?