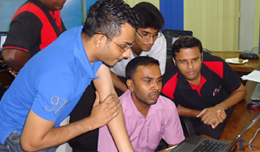 Global CyberLympics is an international cybersecurity competition. There are teams from various countries participating in the competition. The competition is carried out in different parts of the world including North America, Europe, Africa, South America, Middle-east and the Asia Pacific.  It’s hosted by the International Council of E-Commerce Consultants (EC-Council), a member-based organization that certifies individuals in e-business and information security skills and supported by the Geneva-based International Telecommunications Union (ITU).

Team Selection and Sri Lanka’s participation in the competition.

Sri Lanka CERT|CC the national CERT (Computer Emergency Readiness Team) which acts as the focal point for Cyber security in Sri Lanka, as part of its efforts to recognize local talent and provide the necessary platform to practice the skills of Cybersecurity, was involved in forming a team and preparing it for the competition.  The sponsor for the team was the Telecommunications Regulatory Commission of Sri Lanka (TRCSL). TRCSL also contributed to the success of the team by providing the necessary connectivity, infrastructure and location for the team members to attend the CyberLympics.

The first round of the competition tested the Forensic anlysis skills of the teams, while the second round tested their Penetration testing skills. The upcoming third round will test the team’s Computer Network Defense capabilities and if it qualifies for the finals, the team will face the toughest round which is called Capture the Flag. The final round will permit competing teams to use whatever network assessment tools are available to them to compromise and control a series of target hosts.

The other teams from the Asia Pacific region qualifying for round three of the competition are from Russia,Australia and Indonesia. The top teams from each region in round three will compete in the 2012 Global CyberLympics Security Challenge, World Finals which will be held at Hacker Halted on October 29, 2012 Miami Florida USA.