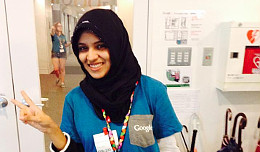 It’s not everyday that one hears about Google’s efforts for education. Meet the Google Anita Borg Scholarship, a program established by a group of Googlers in honor of their colleague Dr Anita Borg (1949 – 2003), an American computer scientist famous for advancing the cause of women in technology. Every year, the Anita Borg Memorial scholarship is awarded to young, female students with outstanding computing skills and potential.

The list of winners for 2014 (Asia Pacific region) include Nuzla Ismail, a Sri Lankan programmer. She’s the first Sri Lankan to receive the Anita Borg scholarship. Her work includes many firsts in Sri Lanka, notably in the field of communication, including adapting Leap Motion technology to convert sign language to text and speech, as a web-based learning platform for Sri Lankan sign language users.

Currently, she tells us, she’s working on that Leap Motion project of hers – it’s halfway there, and she hopes for a commercial implementation quite soon. She’s also quite busy at the moment with two undergraduate degrees: in addition to being an undergraduate in physical science and computing at the University of Sri Jayawardenepura, she also studies software engineering at the Asia Pacific Institute of Technology.