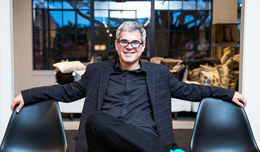 By the time they were considered successful, Charles and Ray Eames were in their fifties.TED speakers come from a variety of backgrounds. From engineers to artists to lawyers, the stage of TED has seen many unique ideas that have changed our perception of things. However, the idea Eames Demetrios has may change how we understand and tell the difference between reality and fiction. Eames is a geographer, filmmaker and the director of the Eames Office, who is building a parallel universe.

If you come from a design background then you probably know who he is. If you don’t know him, chances are you know his grandparents, Charles, and Ray Eames. They were two famous designers from the 20th century that made significant contributions to the development of modern architecture.

Today, Eames has come to Sri Lanka, to make it a part of his parallel universe: Kcymaerxthaere. However, this isn’t his first visit to Sri Lanka. We met up with Eames sometime back at Coco Veranda, thanks to the kind folks at TEDxColombo. It was during this chat, we learned how his grandparents designed great products and how he started designing the parallel universe we are about to enter.

Being the Grandson of Charles and Ray Eames

You may not have heard of Charles and Ray Eames but chances are you’ve taken a seat in a chair designed by them.

Charles and Ray Eames, the American design couple are well known for their contributions to fields like furniture design, industrial design, fine art, and film. It would not be incorrect to say that this husband and wife revolutionized the design industry.

“As a kid, I was learning design lessons from them. But I didn’t know it”, said Eames. Charles and Ray had a philosophy, the role of a designer according to them is that of a good host anticipating the needs of the guest. This is a quite an interesting concept. This was one lesson his grandparents were indirectly teaching him from the films and picnics they took him on. This is one reason as to why their designs are still useful today.

However, a wise man once said that good design evolves with time. “Furniture is beautiful, it’s also a manifestation. It’s the same form but with a similar material that has gone through a lot of iteration,” said Eames. Now they use much greener and eco-friendly materials, a fiberglass variant to be specific, on a bit evolved version of the base design.

Eames told us that he would like to be called a storyteller or a filmmaker rather than a designer. Yet, he’s still a person that cares about good design. Today, he heads the Eames Office as its director; communicating, preserving and extending the work of Charles and Ray Eames.

“I have designed things but I don’t consider myself a designer.” – Eames Demetrios

Eames wear two hats (maybe more) in his day-to-day life. One hat as the director of Eames Office and the other hat as the creator of Kcymaerxthaere, a parallel universe coexisting with our world. “The two roles are very different. For some people it’s volunteering. For me it’s this,” commented Eames. He says that it’s nice to have a balance between these two projects.

What’s unique about Charles and Ray’s designs, is how long their designs have survived. More than 90% of their designs are still in production today. This is because of the energy and effort they put into building their designs. “They didn’t just design furniture. They also made tools and processes,” said Eames.

“One thing Charles and Ray did in their designs best was for them to be incredibly functional while being incredibly beautiful.” – Eames Demetrios

Today, Eames is a person that cares a lot about design thinking. In general, he says there’s a lot of energy in design. When you speak of design, we think it’s all about looks. This is why many designers focus a lot on how something looks. According to Eames, this ruins the balance. The approach results in beautiful designs but they aren’t very useful. A great design like those by Charles and Ray Eames balances good looks with usability.

“They believed toys aren’t as innocent as they appear”, said Eames when we asked him about the toys his grandparents made. He told us that toys can be the precursor to bigger ideas. What most people think about Charles and Ray’s work is that they made furniture first, became successful, and then went into making movies and toys. That is incorrect. During the 40’s before coming into furniture, they did everything possible; movies, toys, graphics, fabrics, architecture, exhibitions and the list goes on. They chose to experiment with few ideas and find the best one.

After countless experiments, they designed the first version of their famous chair. When they revealed it, everybody knew it was a great chair. However, it would be a lot longer until it was commercially successful. At first, Charles and Ray manufactured the chairs. Eventually, they would sell the rights to the chair, which according to Eames was a very smart move. This allowed them to focus on even newer ideas and designs, without worrying about manufacturing.  When they were finally considered successful, Charles and Ray Eames were in their fifties.They chose to play around with a bunch of ideas then make money with the best one.

Scale and the Power of 10

Scale, in this case, refers to powers of 10. Charles and Ray made the film to make you feel exponential growth. Which in simple terms adding zeros over and over. “People use numbers but they don’t know what they mean. To be a good citizen, you need to know about scale.,” said Eames. Out of nowhere, he asks Mazin and me, “How long does it take to count to 1 billion?” We hilariously end up saying half an hour. He smiles and says that it actually takes around 20 years. The point he proves is that we don’t pose that intuitive feeling about these numbers. The feeling to impulsively guess the weight of these numbers, even though we use them in every minute of our lives.

You pronounce it as ‘Ky – MAR – ex –theere’. This is a parallel universe coexisting with ours. This is a global project that tells the stories of this parallel world through books, performances, Internet, embroideries and guided collaborations. Since it’s a story which runs throughout different places around the world the foremost way of telling the story is through markers.

These markers are mainly plaques erected at random places and historic sites that honor the parallel world in our world. Here’s the deal, none of them connect to all markers. Each marker communicates to another marker. The connection is through the story. If you want, you can create your own story instead of going in the linear pattern.

We asked Eames about how he got the concept. He said that it all came out of curiosity of creating the world and letting people experience it without knowing the story. Another reason was that he wanted to create the unique experience that this gives you when you can actually visit the story.

“Without writing a novel, it’s a new way of storytelling. It’s about looking at the same land you live around in a different angle.” – Eames Demetrios

This unique experience Eames created with Kcymaerxthaere is all about brain power. When you visit a plaque, one part of your brain tells you that you’re in a particular environment. However, the other half of your brain helps tune out the noise as you read the plaque and transports you into another world.

But why did he choose to use plaques? Primarily because he wanted to keep things physical for over 100 years. He knew that technology would fail. Furthermore, the plaques themselves play a key role in creating the experience. It’s thanks to the plaques that people can visualize and imagine the story as they read the plaques. If anyone tried reading the story on a monitor, Eames knew he couldn’t achieve this experience.This is why he chose to use plaques.

It’s a novel concept, a crazy idea, and a very popular one. Since Eames first started the project, Kcymaerxthaere has come a long way. Today, it has a very passionate community that is slowly growing. This is a community of people that are known to go on tours to see markers and even participate in a spelling bee using the dictionary of the parallel universe. Surprisingly, Eames told us that there is no conscious plan to build it. Though considering the activity, he may not need a plan to grow it.

During his first visit, Eames was on a hunt for potential locations to place few markers around Sri Lanka. Today, Eames is back in Sri Lanka and is placing markers in a few locations across Sri Lanka as you read this.

To finish off, below are few quotes that we found interesting during our chat with Eames.

“Design should be taught as a life skill, not just a profession.” – Eames Demetrios

Just like we were asked to take music classes when we were kids, the idea is to be open to a different way of thinking. Eames suggests that if design too was taught that way, there’d be a huge difference. “A lot of designers focus more on visuals, not the problem solving. To have a design toolkit in your mind will be more powerful,” commented Eames.

At the same time, we asked the key to becoming a good story teller. He replied, “To start telling stories, figure out your margin and figure out how you want to tell your stories. Don’t wait. Make things happen.”

Finally, if you’re a designer Eames believes that these three factors are the magical ingredients to any great design:

The last tip he had to give was a general note.

“Lot of us have margins in our lives. Many of us have extra time but we waste it. If you want to create something, then use these margins. Time is where you get to explore your ideas.”