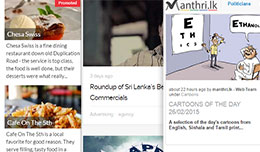 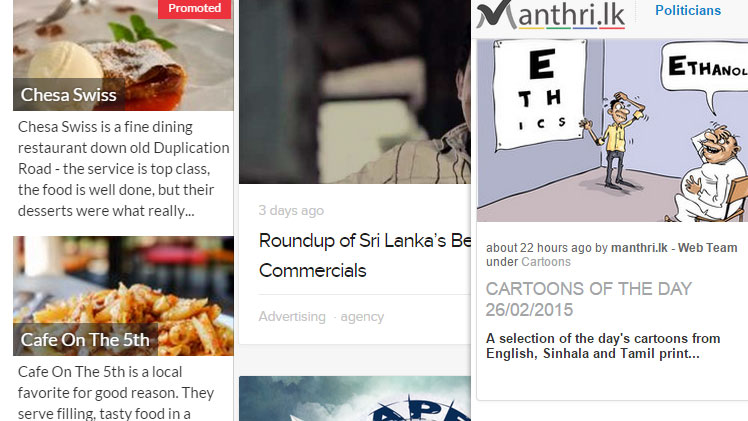 Old is gold, they say. But sometimes, the new stuff is leagues ahead. This time, we’ve got a list of some of the coolest new media sites on our radar.

Now the concept of “new media” is a very hazy one, but as a disclaimer, we mean “new” media sites. We’ve left out sites that are affiliated to any of the large, classical newspapers or the publishing giants of Sri Lanka, on the basis that white the site itself may be a recent thing, the content models aren’t..

So, on with the show: our list of new sites that everyone should keep bookmarked, just in case:

Yamu is known to almost everyone with an Internet connection. It’s basically your guide for places to see, eat and drink in and around Colombo and Sri Lanka. If you’re a tourist visiting our little island or a citizen here who wants to know more about places to see and things to do, Yamu is where you should go. We use it to find places to hang out when we don’t have work.

Roar.lk is very new, very small, but very, very readble. Although not connected to Katy Perry’s smash hit, the site is all about … well, apparently all about anything Sri Lankan, which means it’s ridiculously diverse. They cover a number of different categories ranging from art to tech, entertainment and events. You won’t see a lot of stuff here, but skim through and you’ll find some real gems.

Somewhat traditional in the way it’s written, but quite new and quite popular: that’s Asian Mirror. This website has risen to prominence as a more polite, grounded alternative to the (in)famous Colombo Telegraph. LIke any respectable news sites, it has a slew of articles on the front page each day. It’s also done in Sinhala and Tamil, which explains the traffic. It’s a good place to skim for news everday, as opposed to lengthy reading of opinion pieces.

Manthri.lk is epic. Not only are they THE go to site for stalking politicians and what they do in Parliament, they also occasionally publish some excellent research on bills, laws, rights and things that the general public should be aware of, but aren’t. The fact that it’s done by some very intelligent researchers with actual access Parliament sessions means that the stuff you get out of Manthri are the closest thing we have to proper transparency in the Parliament. And their blog makes for a really good read, especially when it’s got Awantha Artigala’s cartoons in it.

If you, like us, have the sudden urge to see the world from a slightly different and somewhat less sane angle, then head over to www.sira.lk. A repository of all things weird and unusual, the site features content that you won’t usually see on your news feed, unless you’re subscribed to several different sources of awesome and insane and they all suddenly started writing in Sinhala. It’s the Buzzfeed of Sri Lanka. Literally.

Psst: and also, Readme.lk. But you already knew that.