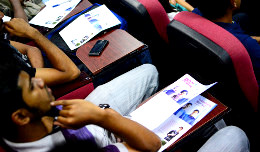 On Monday March 10, 2014 Sheffield Hallam University (SHU) in the United Kingdom launched Capture the Hacker competition at a public lecture held at the SLIIT Campus in Malabe.

Open to students experienced in experience IP packets and Linux, the winner of Capture the Hacker will be awarded a full scholarship for SHU’s MSc Information Systems Security programme starting September 2014. Apparently SHU and SLIIT have been in an academic partnership since 2006.

Check out their website www.capturethehacker.info/. The website is pretty cool,  designed to geek fantasies like something out of a retro command prompt. Remember it’s open to all students experienced in IP packets and Linux – and the closing date is March 21, 2014. Get cracking!