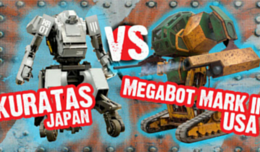 Last Tuesday, a young startup in the US Megabots Inc. posted this video on YouTube:

They challenged the Japanese company, Suidobashi Heavy Industries to a giant robot showdown. Monday morning Suidobashi responded to the challenge:

They accepted! With that Japan and the US will officially meet in one year and have the world’s first giant robot showdown! Welcome to the future ladies and gentlemen.

We did some digging and here’s everything you need to know about this historic challenge and it’s contenders.

The Japanese pioneer: The Kurata

Released in 2012 and priced at US$1,353,500. The Kurata is the world’s first user operated giant robot built by Suidobashi Heavy Industries. According to the company, “‘KURATAS’ is an art piece. It is not a normal vehicle, so it doesn’t guarantee your safety and comfort. However, it does makes your dream of becoming a robot pilot comes true.”

Inspired by Japanese mecha (giant robot) anime, Kogoro Kurata (who the robot is named after) the CEO of Suidobashi Heavy Industries built the Kurata’s body. He would later meet Wataru Yoshizaki that would go onto design the software that breathed life into the Kurata.

Two years after they met, they revealed their 1st prototype and the rest is history.

It’s 13 feet tall and weighs approximately 4.5 tons. The Kurata is a heavy robot with a four wheeled thirty joint exoskeleton. Powered by a diesel engine, the Kurata’s four wheels allow it to travel across the battlefield at a top speed of 10km/h.

The most impressive feature of the Kurata however, is it’s V-Sido Operating System. This allows it to be operated by a single person directly or remotely. Yup, you can control the Kurata inside the cockpit or with a smartphone via 3G. Furthermore, it’s Master Slave function allows an operator to move the Kurata’s arms exactly as he/she wishes. Additionally for even more accurate control of the Kurata’s hands,
If anything a Kurata is a giant robot that can be easily controlled.

The Kurata was not designed for the military. Nonetheless it has a large arsenal.

Capable of unleashing 6000 rounds per minute, this is Kurata’s primary weapon. That wasn’t deadly enough for Suidobashi though. The V-Sido system automatically locks-on to enemy targets. Once locked on, the operator can unleash a devastating barrage of BB bullets at all targets simply by smiling. Suidobashi calls this, the Smile Shot. Nope, we aren’t kidding here at all.

A fixed shoulder mounted launcher that shoots water bottles. The LOHAS launcher is the least accurate weapon in the Kurata’s arsenal. However, it’s likely to Suidobashi will modify it to give a heavy punch to the Megabot when the LOHAS scores a hit.

It’ll rip large enemies apart and toss smaller ones aside. Replacing one of the Kurata’s standard hands, the Iron Crow is a real giant metal claw.

A standard shoulder mounted shield. Like all shields, it’s designed to take punishment in the Kurata’s place. While it might not protect the Kurata’s from actual bullets, it definitely can take a beating from Megabot’s paintball. The question is how many paintballs?

The KH gun or the Kurata Handgun is a twin barrelled hand gun. As the name suggests, it’s designed to be held in the Kurata’s standard hands and fires BB bullets. We’re not sure whether it supports the automatic alignment and smile shot like the gatling guns. However we wouldn’t be surprised if it did.

It goes on the torso. This provides an additional layer of armour for the operator. Though, we are not sure whether the shot proof armour can withstand actual bullets.

Like we said, the Kuarata has a LARGE arsenal.

In November 2014, a young startup called Megabots Inc. launched a Kickstarter campaign. Their goal was to build robots and create the the sport of the future, giant robot battle tournaments. Sadly, they didn’t meet their funding goal.

However hope was not lost. Autodesk decided to give the young startup the funding they needed to build a working prototype. Why? Because they were so impressed with how a giant robot was designed with their 3D modelling software.

The Megabot Mark II stands at a height of 4 meters. It also weights approximately 6 tons. According to Tech Times, it can travel on it’s tank treads at a top speed of 4km/h at the moment.

The Megabot will be operated manually inside a cockpit by a crew of 2, a pilot and gunner. Both of them are protected by F1 and NASCAR-grade roll cages, because getting hit by a Megabot’s paintball means a permanent nap.

Furthermore, since the Megabots are designed for a tournament they’re made to break apart. As the Megabot gets hit in battle it’s armor panels get damaged. Afterwards smoke and sparks pour out, limbs then fall off. Finally the robot falls to the ground.

In terms of firepower, the Megabot Mark II doesn’t have giant arsenal like the Kurata. Currently it only has the 2 cannons on it’s arms. However, underestimate American cannons at your own risk. Both these cannons fire paintballs that weigh almost 3 pounds and at speeds of over 120mph!

However, the Megabot currently has no melee weapons. If it’s to take on the Kurata then it’ll need atleast one melee weapon to honor Suidobashi’s conditions.

So when and where is it happening?

Exactly one year from now, both robots shall meet at location of Megabots’ choosing.According to quartz, both sides have to now set the ground rules and more importantly figure out how they can avoid killing each other. Once these details are sorted, both teams will have to start getting ready for this historic showdown.

Right now both robots are fairly tied in terms of raw power. While the Kurata has a large arsenal, the Megabot will probably be vastly different in one year. End of the day though, it doesn’t matter who wins. It’s the giant robot battle we sci-fi fans have been waiting ages for. It’s East meets West in the ultimate showdown! Gundam vs Transformers! Whoever wins, the match is going to be epic. Which team are you rooting for? Let us know in the comments!