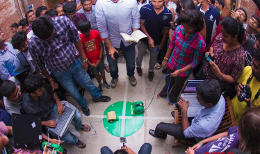 YUDHANJAYA:
Trace Expert City is a beautiful place. When we last visited it, to interview the team behind the Vega, it was mostly a concoction of mud, men and half-complete brick structures. It’s vastly improved in those few months. The paths are in place, and up close Trace looks more like a charming campus than an office space. 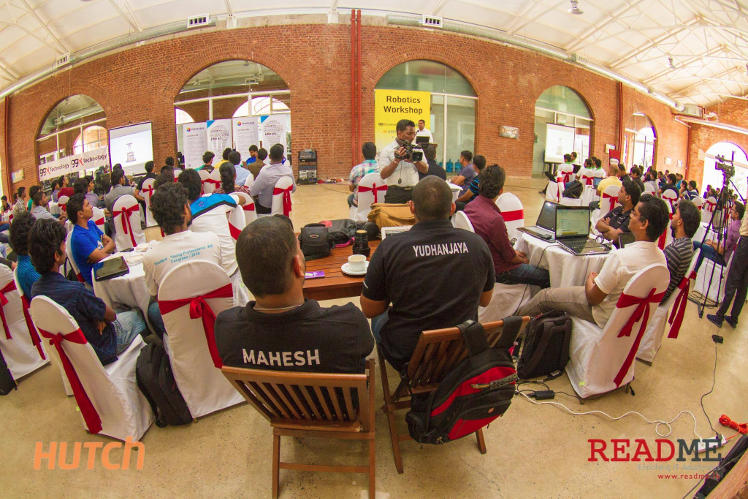 What were we doing in here? The Robotics workshop, an event taking a hardware-hacker approach to building and deploying robots with – get this – JavaScript. Needless to say, we were intrigued, and not just because we like JS. (Photos by Malshan Gunawardhane)

As we entered the large hall / module, teams of JS hackers were taking their seats, a whole lot of banners being carted about, and the tea lady was wondering how many cups to lay out. We saw the logos of SLASSCOM, 99x Technology, CodeGen,  Tech Talks, even the JS meetup crew go up in rapid succession, and by the time we’d located a table with power and hooked up our Hutch 3G, the event was ready to begin.

The first to break the ice was Indaka Raigama, CEO of Navantis and director of SLASSCOM, who gave us a rundown of what the event was supposed to be about. SLASSCOM’s been brainstorming for quite a while on ways to get the tech community into one place (hopefully, not to blow them up), and had eventually hit upon the idea of bringing together competitive teams of coders, all the way from industry professionals to university students, and letting them go hammer and tongs at their own little robotics project. 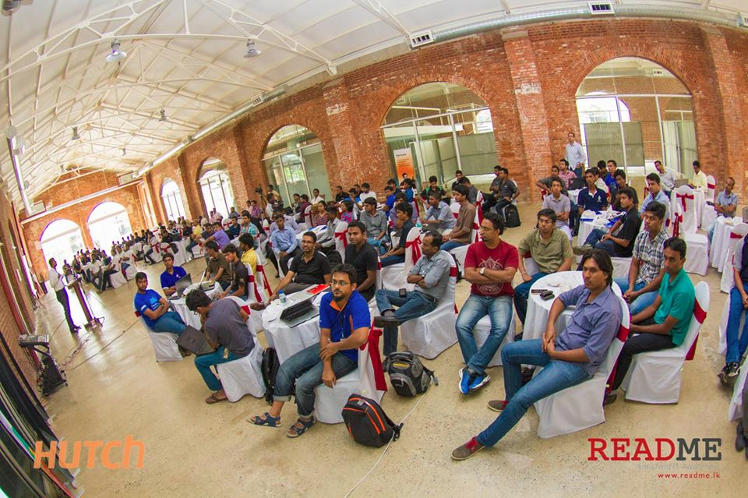 Of course, no event would be anywhere close to done with just one speech, so we had more. Rohan Munasinghe of the University of Moratuwa showcased a great deal of the hottest robotics tech there. Admittedly, it’s far behind the likes of MIT, but they’ve built – and are refining – UAV drones, mine defusal robots, and VTOL (Vertical Take Off and Landing) drones that might even have military appliances in the not-too-distant future.

Ruwan Senaratne of the Codegen VEGA project (which was practically next door) dropped by to talk about the part robotics and autonomous decision making components play in the construction of a supercar. Last was Sankalpa Gamwarige, GM/VP of Engineering at Zone24x7 (which has been keeping remarkably quiet as of late), came onboard to explain how and why a great deal of robotics was actually software, and that contrary to popular belief, it’s tremendously easy to get started in robotics even if you aren’t a hardware hacker.

“There are plenty of off-the shelf components that you can put together to make your platform – you don’t have to built everything yourself.  Look for robot software development frameworks like ROS and Microsoft Robot Studio. There are visual programming languages – Lego Mindstorms, Microsoft VPL; scripting languages like cylon.js and node.js; and of course, conventional languages like C++, JAVA, MatLab. There are plenty of platforms. Remember: the most important thing is your imagination.”

MAHESH:
With the closing speech, the first part of the workshop comes to a close. While Yudhanjaya goes hunting for any remaining sandwiches and tea, I take over his Macbook and begin typing.

The teams are given a five minute break to freshen up, stretch, yawn and get ready for the hands-on session. People amble away, greeting one another and generally trying to figure out what happens next. Yudhanjaya returns victorious with sandwiches and half a roll he claims is not Chinese.

Soon after the break, the hands-on stuff begins. Attendants go around handing out packs containing electronics – circuit boards, wheels, LED bulbs, Arduinos and all manner of wires. Hasith Yaggahawita of 99x Technology, after a bit of fiddling with the mic, and possibly trying to DJ with it, introduces Andrew Fisher, who’s here to show the teams how the components of their robot kits – primarily that Arduino – will work. 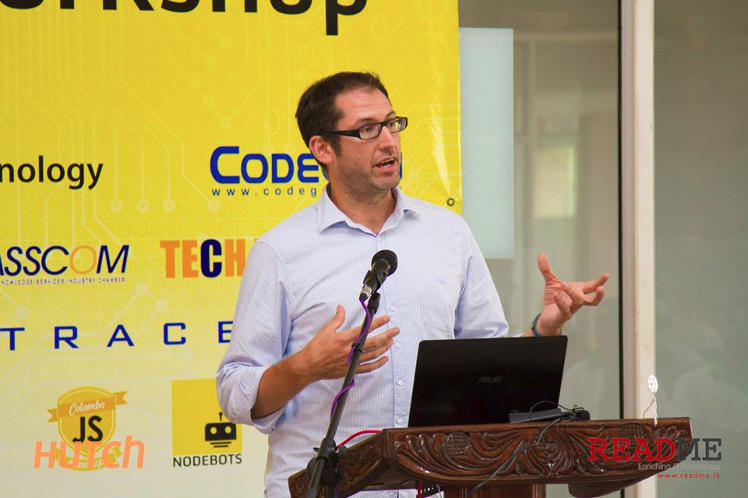 “Its really hard to blow this chip up, so its very friendly”, he says encouragingly, explaining about Arduino, its features and specifications. He proceeds to explain about the JS hardware stack and its hardware and software components such as the Arduino board, communication protocols and other elements. Nodding heads all around and some frantic Googling.

As he pulls up stuff on the screen, people around us take notes and run searches and download odds and ends of code that they hope will enable them to put their project together. People go around handing bags full of kit – PCBs, cables, motors and suchlike. The workshop is ready to begin.

YUDHANJAYA:
The next few hours saw teams going into a huddle, each trying to figure out how to a) build a robot and b) build the same robot to face another team’s robot on a Sumo mat. And no, these weren’t Japanese bushido bots, but an altogether more introductory, and basic, bunch of rovers. The underlying platform was the same: two wheels, one brain, a laptop as a controller. 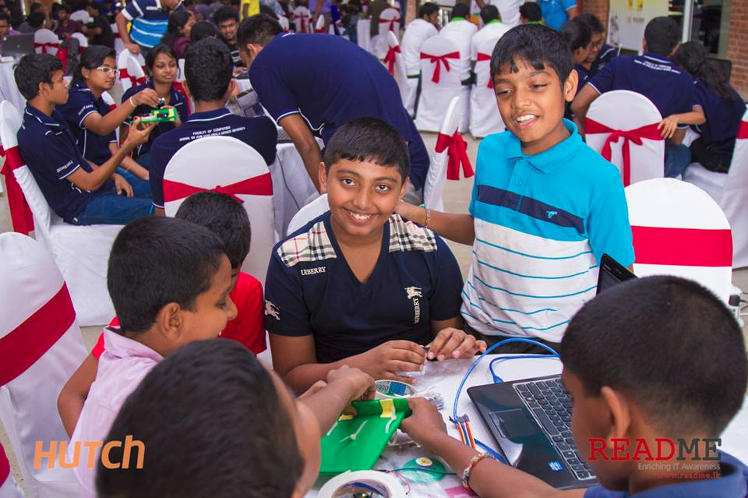 After lunch and a brief tour of the Vega workshop, we noticed teams customizing their bots a bit – the team from WSO2, for instance, had attached a pocket knife to a swinging arm. Interestingly, a group of kids were also parked in one corner, hacking away with the rest (and the best) of them.

By 4:00 PM, many teams had progressed on their projects – we were starting to see the beginnings of rovers. Wafts of coding discussions reached our ears. A bunch of guys in gray Dev Day shirts argued about a function that didn’t seem to exist. A bunch of very ordered blokes from Millennium IT reached some kind of milestone and broke for tea. Life went on.

MAHESH:
While the teams indulge in the food, we wander off in search of better edibles, but to our dismay, the weather gods have decided to rain down upon us (literally). Yudhanjaya takes up the challenge of walking across the hall to the other side where the canteen is (in the pouring rain, mind you) only to discover that the canteen too is closed. However, we do find a few people at the Calcey office (which is next door) playing Mortal Kombat on an Xbox. 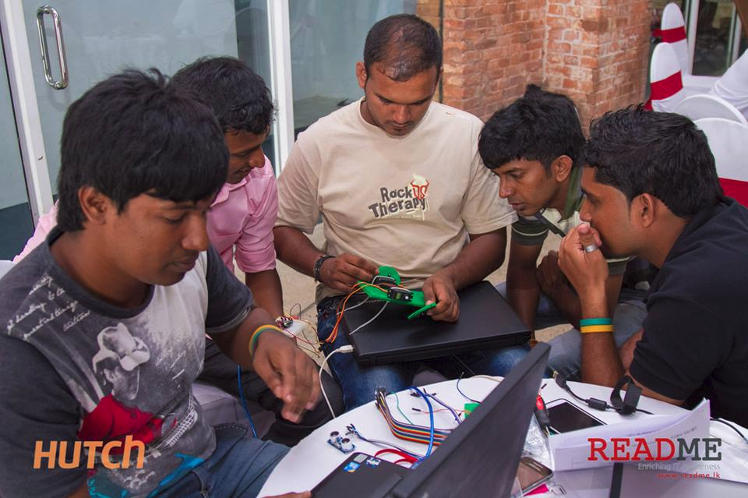 6 PM now. The teams are finishing up and adding the final touches to their robots. The final task is the “Sumo challenge” –  two robots on a small mat, pushing each other out. The mat in question is approximately 3-4 feet in diameter. The robot that is pushed or moves out of the circle loses. With shouts, claps and exclamations the teams battle each other, and the rest of the audience battle our photographer, Malshan, for the best viewing angle.

It’s not a competition per se, so there weren’t any ranks as such. However, to push a robot out of the ring, one must have power. These little robots didn’t; their little electrics could only barely propel themselves. And so it fell to design. Those robots with twitchy handling quickly fell out- either by eliminating themselves, or being unable to wriggle out in time. The straight-line pushers didn’t last long, either. What did succeed were designs that had a sloping battering-ram construction in front of them, turning them into a moving shovel that could neatly push any robot out of the way. 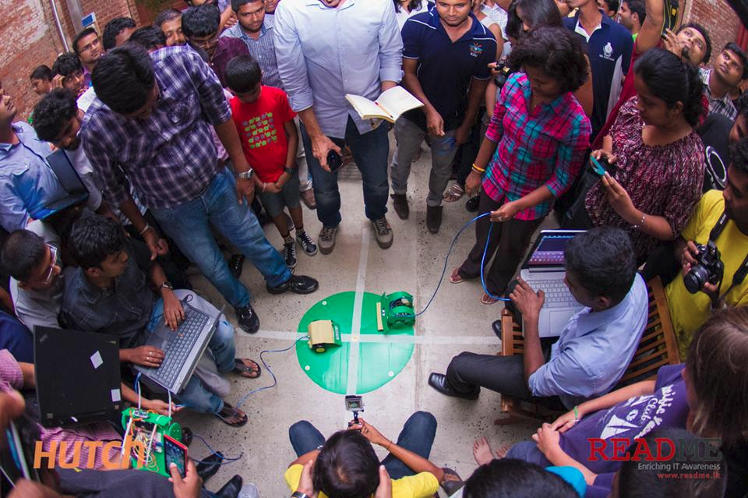 WSO2’s crazy knife-swinging robot, which Mazin eventually christened BatteringChan, didn’t stand a chance. The last match of the day, however, was the most interesting: the kids brought out their robot, a monstrosity with paper cups for horns and who-knows-what-else in there. We expected it to steamroll the nimbler, but far lighter bot on the other side.

It didn’t. The kids demonstrated classic Helm’s Deep tactics: they stayed in one place and let the enemy push himself over the edge.

Now, I’m not sure if this was a fluke, or whether someone in their team had figured out that their robot was really too heavy to push or be pushed, but I can say I’m looking forward to the next robotics workshop, if there is one. Bring on the bots.